Fire Emblem: Three Houses was one of my favorite games from last year, and the series has been noteworthy for me since I was introduced to it years ago. I logged a record number of hours into the game from the day it came out (only rivaled by Persona 5 and Final Fantasy XII, even at 85 or so hours on the first playthrough) and when Nintendo announced that there was going to be DLC content, I was a bit skeptical, to say the least.

The Fire Emblem games have generally had decent DLC. Awakening‘s DLC had throwbacks to just about every game in the series’ prolific past, Echoes of Valentia had a couple of side quests and a few new characters- but Three Houses felt so complete with four different paths and a number of ways to tackle party building and class customization. Personally, I was a little worried that adding anything that could build on the plot of the game could convolute things, save for one or two very specific open threads left by the game’s main plot.

(As a note, if you want to go into Cindered Shadows completely blind, here is your chance to bail before any spoilers!) 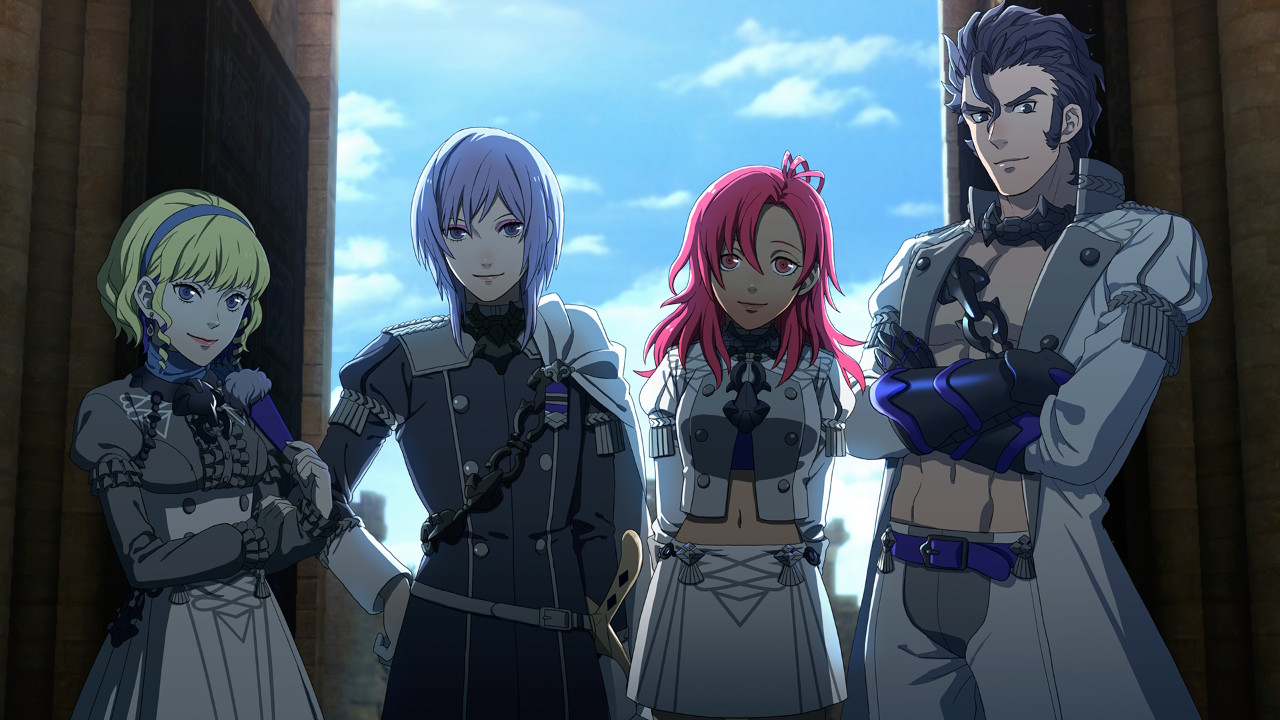 On February 13th, Cindered Shadows was released. Promising a story of a new house called the Ashen Wolves, trailers gave some details about a plot revolving around an area under Garreg Mach Monastery called “Abyss” where a number of students and other people lived for a number of reasons ranging from societal casting out to committing morally gray crimes and needing a place to hide. Four new characters- brash Balthus, the aristocratic Constance, straightforward-to-a-fault Hapi, and the mysterious Yuri- were to be added to the roster and given the spotlight in the tale involving the strange village beneath the monastery.

For the most part, the story of Cindered Shadows works. The details as to why the people of the Abyss are there, the connections that each of the characters has to the world of Fodlan and its mythos are strong enough, and there are only a couple of moments of “well, why didn’t we hear about this before if it already existed”. The characters are good additions, too, with the small cast from the original game making comments and connections for the audience to flesh out the newcomers. Some care was given to slide the plot of this DLC into the tales fans already knew about the game’s world.

What does this add to the main content of the base game, then? Once the whole side story is finished- an easy task since it is only six chapters and about five hours or so total- all four characters become recruitable in the main game. They also bring four new classes with them, all of which have been displayed in past games: Trickster, War Monk, Valkyrie, and Dark Flier. When the characters join up with Byleth’s ranks in the main story, they will bring a certification that will let any characters take on their class from Cindered Shadows. There are a few other benefits, as like a renown bonus, DLC items, and access to the Abyss with features that include the ability to trade items for renown or vice versa.

Cindered Shadows isn’t going to blow your mind if you’ve played through Three Houses already but it does make for an interesting and engaging story. It is challenging and introduces a couple of new mechanics in some chapters, but with the time-turning Divine Pulse at play, it isn’t hard to take a few steps back and approach your enemies and problems a different way. Is it worth the price tag of $30 for the Expansion Pass? Sure. The Pass gives you plenty of other extras that had already been offered before Cindered Shadows came out, and if you’re a fan of Three Houses, Cindered Shadows is a worthwhile investment.

Up until recently, I’ve never played through a Metroid title.  I’ve honestly only ever even picked up two of the games in my life- the original for the NES and Super Metroid for the Super Nintendo.  Fairly recently, I mentioned this on Twitter and after a few exchanges with some folks there, I resolved to finally play through the most vocally revered entry to Samus Aran’s adventures: Super Metroid.

I can pinpoint why it’s taken me so long to get to the series in a few ways.  In its prime, Super Metroid didn’t appeal to me as a gamer on most levels.  It’s taken me a while to embrace the science fiction gaming genre.  The general mechanics of exploration- now dubbed as an entire genre called “Metroidvania”- didn’t appeal to me in the slightest when I was younger, either.  By the time I started becoming intrigued by the Metroid games, the series already had a bunch of titles under its belt.

Since then, though, I’ve become endeared to a number of sci-fi flavored games and have played through a number of recent Castlevania games that play in a similar fashion to what I had been avoiding due to years.  Given my mission statement to experience and learn about as much gaming as I can, it felt like it was time to fill in this gap in my digital past.

One might ask “how did I feel finally having played Super Metroid”?  I’m more than happy to share my impressions about the experience with you folks!

(As a quick aside, I’m toying around a bit with the format of the reviews so you may notice some shifting of sections in the next few before I settle on the best format for what I’m going for.  Any and all feedback is welcome, as I want these reviews to be as reader-friendly as possible, too!)
END_OF_DOCUMENT_TOKEN_TO_BE_REPLACED 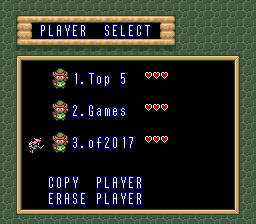 In mere days, 2017 will have left us, and in its wake, there was a glut of fantastic games that graced our various consoles and electronic devices.  Being that I tend to focus more on old-school games and more cost-effective options than new releases tend to lend themselves to, my experiences with games that were released in 2017 are slim.  I did still manage to play a few great games that were actually released this year.

Most of my criteria for the games that I added on to this list were simply that they were released within the year and that I had played enough of them to really formulate a solid opinion on them.  Some games that didn’t make the cut I’ve been enjoying but I’m still cutting my teeth on- Nintendo’s Super Mario Odyssey and Deep End Games’ Perception being two notable titles that are very promising- and a lot of games I completed this year are a year or two off- Night School Studio’s Oxenfree comes to mind.  Honestly, if you’re looking for recommendations of games outside of the past year?  I’m a wealth of information and offerings.

What did I manage to play from this year, though, that has stuck with me and made some kind of impact?  After thinking thoroughly through my playlist over the past twelve months and sequencing them by relevance- well, I’m just impressed by people being able to work out top 10 lists without endless agonizing.

Now, to add to the top lists of the year of 2017- here is my list of my completely subjective and biased top five games from the year (and one honorable mention) for your consideration and entertainment!

(Oh, and as an added note, while I try to skip over spoilers as much as possible since I’ll be writing a bit more about some of these in upcoming posts, there very well may be spoilers.  As vague or minute as they might be, I’d rather warn my readers than not!)

END_OF_DOCUMENT_TOKEN_TO_BE_REPLACED

Over the years, certain properties of companies like Nintendo have fallen to the wayside. Some of them also have a cult following, fond memories of yesteryear making for occasionally fulfilled wishes of revisiting once promising stories and characters. One title in particular, Startropics, is a title that I remember from growing up but never really playing it, despite stories about how much fun it was. It fell off my radar growing up, though. Thanks to some manner of circumstance, Startropics came back into my periphery. I decided to seize that lost opportunity from years ago and take the game for a whirl.

Startropics has a couple of flags that pop up, so far as some of my research has come up with. Word has it that this is a Zelda clone. Given that the game came up mere years after the original Zelda, that wasn’t the most promising thing I could hear, but it’s certainly not a strike against the game from the outset. There has to be some reason that the game didn’t spawn more than one sequel, though, right? If it has so many people who have such fond memories of it, it has to have done things right.

Could it be that the game was just a victim of being forgotten? Maybe it’s just the haze of nostalgia that’s left a mark on gamers who played during a simpler time?

END_OF_DOCUMENT_TOKEN_TO_BE_REPLACED

No Game Is an Island – Nintendo Gameboy/Gameboy Color – The Legend of Zelda: Link’s Awakening DX – 1998

It has been a while since I visited the Legend of Zelda franchise, and when the holidays brought the Triforce Heroes cartridge to my 3DS, I started to wax nostalgic. Growing up, my mother and I played through A Link to the Past a few times, along with the original game, and while we were recalling memories of this over the holidays, we downloaded Link’s Awakening for her onto her 3DS so that she could play through it.

With that, of course, I needed to get the game myself to reminisce. The game has been an outlier of the Zelda series, though it has been popping up through references in recent games such as Hyrule Warriors and being available on the Virtual Console. More people have had the opportunity to experience this game.

In all honesty, this is a great thing for fans of the series.
END_OF_DOCUMENT_TOKEN_TO_BE_REPLACED