Top 5 – RPGs That Shaped Me as a Gamer

I am a prolific gamer of the RPG genre.  I started young with tabletopping Dungeons & Dragons with some neighborhood kids.  These same neighborhood kids had an SNES, and when I went over for our game one day, I noticed one playing this crazy looking game on his system, with stats and equipment and little characters running around before the screen changed and he entered a fight.

It turns out he was playing Final Fantasy III (what we nowadays know as Final Fantasy VI), and I was blown away by the idea of being able to play a game like this.  I became like a man possessed trying to figure out how to get one of these RPG videogames in my own life.

I considered an article today on five games that had heavy influence on my gaming career, and started putting caveats in place.  I first decided I would not post about a game that I have previously posted about before (which excluded Xenogears from my lineup).  No more than one game per series, no matter how many of them I’d consider influential to me.  I also decided to post one RPG per system, another major hurdle.  When I began writing out the list and realized that three out of five of the games were RPGs already, I figured I may as well make the jump to fully discussing the genre, and could write about those other games separately.  With all of that in place, I still had trouble paring the list down to what I did.

So now, I present to you, in no particular order: Five RPGs that have truly shaped me as a gamer.  I must warn you that I’ll be discussing some things that may reveal spoilers.  They are all a bit older as far as games go, but I thought it only fair to include the warning.

END_OF_DOCUMENT_TOKEN_TO_BE_REPLACED

Since I have become friends with @3pstart, I began to do something I never really did before: pay closer attention to who is actually making a game.  Yes, I am ashamed to admit it, though admit it I must: for someone who enjoys gaming as much as I do, I didn’t really pay the companies who make them much attention.  There are exceptions of course (all those years of arcade fighting games from Capcom in particular), but I hadn’t even really given it any thought.  Imagine my surprise as I was looking up information for Adventures of Lolo and found that they were the same company that had created the Kirby franchise!  This week, at the request of one of our readers (thanks ParticleBit!), I present you with Kirby’s Adventure. END_OF_DOCUMENT_TOKEN_TO_BE_REPLACED 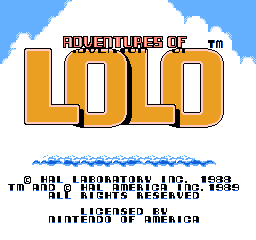 I have had relatively little exposure to the NES, and since it doesn’t hold much nostalgia for me, I tend to avoid exploring the system.  While having a few drinks at a friends house and playing around on his Wii-U, we were downloading the games he had previously purchased.  I spotted Adventures of Lolo, and it’s sequel, and asked him about it – I hadn’t seen them before.  He happily informed me that Adventurers of Lolo was one of the first games he had owned, and asked if I would like to play it.  I made the mistake of saying “Sure, of course!” END_OF_DOCUMENT_TOKEN_TO_BE_REPLACED