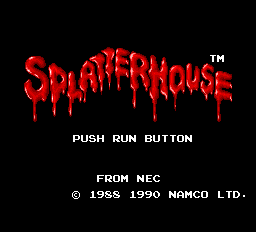 Despite some dabbling into the series, the Splatterhouse games have flown low on my radar for a while. There’s nothing in particular that has kept me from them. I played them a bit as a kid, but the only one I’ve played through was the reboot that came out a few years ago. It’s always been interesting to me but for a few reasons, it kept getting brushed aside for other franchises.

The strange part is that Splatterhouse has a myriad of elements I enjoy. The protagonist is a buff hockey-mask wearing figure, the story has elements of Lovecraft and slasher films, and it falls right into my retro wheelhouse. The excessive violence, even having been toned down before being released on American consoles, would have been right at home alongside games like Night Trap and Mortal Kombat during the creation of the ESRB ratings and trials. The only thing keeping me from playing through the entire series was a lack of a Turbografx-16 growing up.

In an attempt to take a look back at the system and its library, I knew Splatterhouse would have to be one of my first stops due to how long the title’s been sitting in my backlog. Since the series has fallen into obscurity despite a relatively successful revival back in 2010, I thought it could be fun to check on the beginning of the series and how it evolved, not to mention how it holds up now. 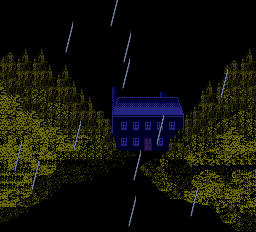 Plot
There are rumors of a house in the forest where devilish and unspeakable experiments are carried out. Locals say that it is the work of a parapsychologist by the name of Dr. West who used to teach at the university nearby but has gone missing recently. People stay away from that place- unless they have no other choice.

While out late one night, two university students, Rick Taylor and Jennifer Willis, find themselves stranded in the woods, a terrible storm bearing down on them. Worried about making it back safely, they find themselves at the doorstep of the West Mansion- also known as the Splatterhouse- with no choice but to take refuge inside until the downpour passes. As soon as the door shuts behind them, Rick hears Jennifer scream and everything goes black.

When he awakens, Rick realizes that he had died. The only reason he’s alive is the strange mask that has attached itself to him: the Terror Mask. Strengthening his physique and feeding him with the rage harbored within in, the Mask guides Rick to find Jennifer and save her. Confronted with a missing girlfriend, a house full of demons, and a mask with its own nefarious intentions, Rick must forge his way through the horrors of the Splatterhouse to save Jennifer and escape.

Mechanics
Mechanically, Splatterhouse is simple to pick up. Controlling Rick, the player can move left and right on a two-dimensional plane, fighting enemies that will approach from all directions. Attacking is handled with one button while jumping is handled with the other, and being able to handle jumping attacks and crouching attacks is important for a few reasons. Almost every enemy outside of bosses suffers knockback if they don’t die from one hit, vital to keeping Rick’s health and lives intact. The other being that enemies will attack at a number of levels- and very few of them will enter the screen without homing in on our anti-hero.

This guy, in particular, will cause severe aches in your lower back region

As the levels go on, Rick will come across weapons lying around or leaning in the background. By crouching or facing upward appropriately, Rick can pick up these weapons to help dispatch enemies at a safer distance or with more efficiency. These weapons don’t always stand out and they can become imperative to dispatching some of the difficult bosses. One trick players can utilize to preserve their weaponry is to use a combination of crouching and jumping attacks and only using the weapons when they need to.

So far as the game is concerned, the mechanics are simple. Avoid being hit while hitting your enemies. At the beginning of each of the seven chapters of the game, Rick regains some of his health, and by killing a certain amount of enemies, he can gain extra lives. Given how unforgiving some of the obstacles and enemies can be, it’s important to approach the levels- which only take a few minutes each to play through- in a methodical way, despite how action-oriented the game appears.

The Good, The Bad, And…
If you love the B-horror genre and you can stand some over the top 16-bit gore, Splatterhouse will absolutely scratch the itch for you. It’s easy to jump into, the mechanics are simple, and the tone is dark but colorful. The game does also get easier the more you play it in classic trial-and-error fashion. It’s easy enough to come back to and get back to where you lost your last life.

Great as it is, though, there really isn’t much to Splatterhouse. The levels are short, the mechanics are a bit too simple, and outside of the game’s difficulty, there isn’t much to do overall. Given the fact that Rick tends to knock out most enemies without weapons in one hit, even the weapons are conditionally useful (and for one boss, absolutely necessary for all but experts).

That’s not to say the game is all spectacle and no substance. As a port of an arcade game, it’s easy to see Splatterhouse’s quarter-munching origins. Unless the atmosphere of the game catches you or you’re a quick learner concerning the enemies and their attack patterns, the game isn’t going to do much for you. It works more as a foundation or blueprint for what could be, though it makes for a solid foundation.

Things only go from weird to worse in the West Mansion

Presentation
Splatterhouse’s strongest selling point is its graphics and soundtrack. Looking at the game brings to mind splatter films and a number of clear homages, most notably in Rick’s design which had to be altered so that it didn’t emulate Jason Voorhees from Friday the 13th too closely in the US. The art is macabre in a beautiful way as far as the enemies and environments are concerned. The creature designs are grotesque and the animations are suitably unsettling but exaggerated.

The soundtrack is the right amount of synthesized beats, needling suspense, and otherworldly sound effects. It doesn’t exactly break the mold until the last couple of levels. While they may seem small, touches like Jennifer’s screams of “help me” once Rick finds her and the stellar ending theme of the game leave an impression. While the music wasn’t much to write home about overall, there are some great moments of sound design in the game that are still chilling.

Conclusion
With thirty or so years under its belt, Splatterhouse shows its age in its simplicity. While it broke some new ground in what it had to offer atmospherically, the game is painfully simple at this point. It doesn’t offer much to look back at, but in its time, it’s not hard to see why it may have made a visceral splash. It’s got buckets of charm for horror lovers to steep in and if anyone wants to step back into the history of the series, it’s not a long stop even once it’s been mastered.

The game has also been released a few times since its original console premier so it isn’t impossible to check out and might be worth looking into for folks who are interested. While it’s spawned a couple of sequels and a reboot, the mileage the original Splatterhouse offers only goes so far. It’s not bad but for the cost of the ride, it may not be worth it for anyone other than the horror inclined.