As folks may or may not know, I spent this past weekend at the PAX convention in Boston, staying with a couple of friends near the city and immersing myself in three days of games, merchandise, and fellow fans of nerd culture. Overall, it was an absolute blast. I met with some fellow content creators, managed to grab quite a bit of swag and games that I had been eyeing for a while, and most importantly- I got to chat with developers and check out their games.

Some folks might have heard that there were some no-shows concerning some larger companies like Sony, so there were no demos for The Last of Us 2, for instance. While this made the expo floor feel a little easier to navigate- Sony’s giant area was instead a bunch of smaller vendors and developers by the time PAX opened- the largest games on display were Animal Crossing: New Horizons and the remake of Final Fantasy VII, both of which were near-impossible to get to (though I did manage a demo of Animal Crossing, which was everything I wanted it to be and more).

With all of that, though, this was a year for indies both released and upcoming to shine. Last year, I made a list of games that hovered around the line of high-profile and completely unknown. This year, you might find that there are a lot of games you haven’t heard of on this list if you don’t dabble in the independent gaming scene much. It’s not that the more well-known games didn’t make some kind of impression. If I have to put up an Honorable Mention, Animal Crossing is a game that I’ve been excited about for months and lived up to what I was hoping it would be. Despite the amazing spectacle of the display area, though, and the immense crowd around it at all times, it wasn’t one of my top games I saw at the convention.

Maybe it was the excitement surrounding the smaller booths. Maybe it’s the fact that I’ve been watching Animal Crossing and Final Fantasy VII unfold on the internet for months. Whatever it was, my attention was drawn to a lot of smaller developers this year.

So in no particular order…

Billed as a cooperative action arcade game, StarCrossed checked a few boxes right off the bat for me. It was first pitched to me as “Magical Girl Pong”. I know this doesn’t appeal to everyone right away, but my ears perked up. While it’s a simple concept, it was a lot more fun in execution than it sounded at first.

While there’s a story mode that can be played single-player, the cooperative play was the real hook. Each player chooses from a group of five Sailor-Moon-adjacent characters to act as their “paddle”. When the game opens, each side is populated by a player who can move around and bounce an orb back and forth. The orb is drawn automatically toward the character it is heading toward which makes the game seem easy at first.

The game becomes more difficult, though, as enemies appear, prompting the players to line up their orb to strike their assailants while keeping themselves safe. Some of these enemies require a number of hits or being struck from a certain side, so there’s an element of coordination involved. Touting the fact that it can be played online or through features like Steam’s Remote Play, it could be easy to play with a friend and doesn’t take forever to set up or reach a stopping point for.

Since the game is already out on Steam, I bought it while I was at PAX, but there are plans for it to reach other platforms over the next year.

Some of the early survival games like Oregon Trail were oriented toward resource management and with very little story aside from reaching Point B from Point A. While there have been a few exceptions, “roguelike” survival games tend to be light on story in lieu of focus on the survival aspect or on the interactions between characters like the recent offering This War of Mine.

The Red Lantern offers up a story-driven survival experience with a number of elements from the titles I’ve just mentioned. Playing as “The Musher” (voiced by the amazing Ashly Burch), your goal is to reach your home over five miles of Alaskan wilderness. Where your choice in team lies is in your team of sled dogs. Each of them have a different personality and abilities and they need to be taken care of as the trip carries on and The Musher’s story unfolds.

Of course, there are environmental hazards, as well- exposure, bears, storms- and Timberline Studios promises that there are hundreds of things that have a chance of happening over the course of your journey. Given the narrative nature of the trailer and speaking on childhood dreams, Red Lantern promises some depth so far as its protagonist is concerned.

Look forward to the game coming out something in the second quarter of the year. 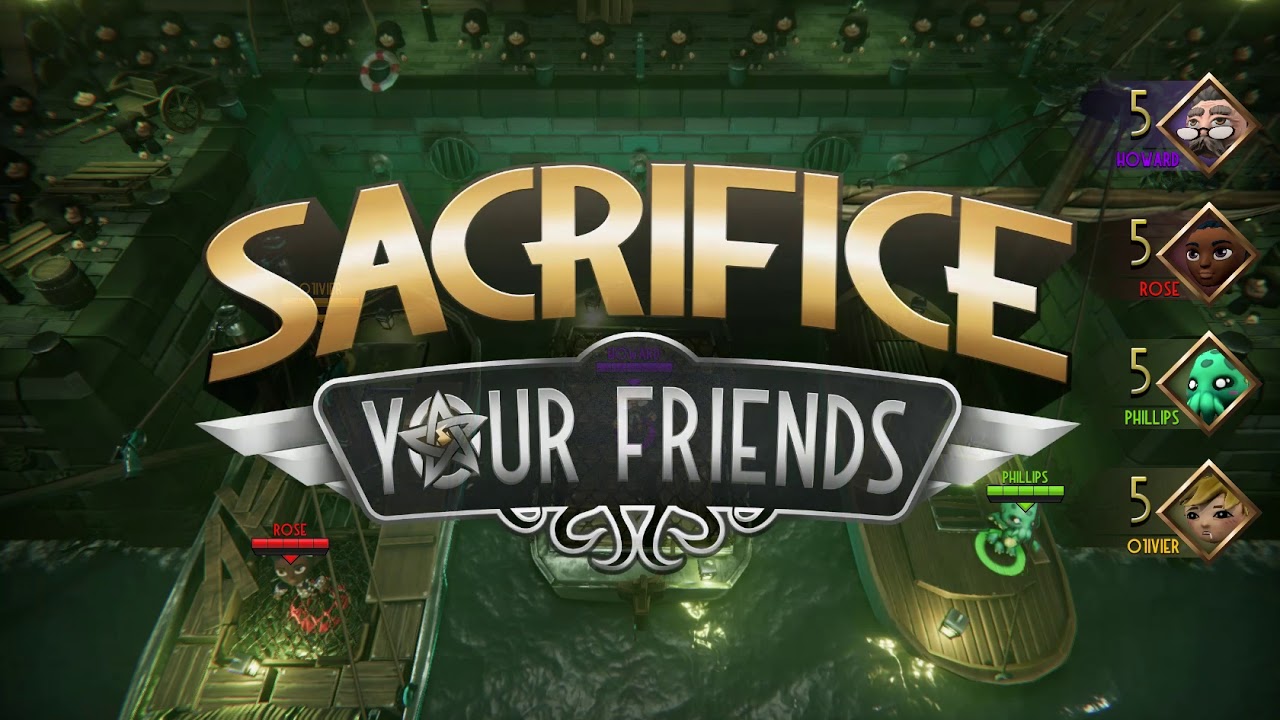 Once again into the multiplayer fray, Sacrifice Your Friends may have been the most fun I had with a demo the entire time on the floor. It’s tough for me not to give some kind of attention to a Lovecraft themed game, let alone a party game with cartoon styled graphics.

Touting itself as a battle royale game in the vein of Power Stone, there is a Story Mode and a Deathmatch mode. In the Deathmatch, up to four players can choose their character, costume, team color- and Old God to worship and become an avatar for.  Starting with 10 lives, each player can run around the various maps, picking up weapons that appear out of nowhere and knocking each other off of the edges of the screen. Last one with lives remaining wins. Sounds simple, right?

As the levels play out, environmental hazards like sandworms, giant tentacles and speeding freight trains crop up, claiming a few lives from the unwary. Each player also has an insanity bar that fills up the more they engage in combat. Once it fills, one press of a button can transform them into a nigh-unstoppable creature that can wreak havoc for a short amount of time. Of course, when three Cthulhus (Cthulhi?) transform at once, more mayhem follows in a madcap brawl until one remains.

Sacrifice Your Friends will hit multiple platforms in the Summer of this year.

Another game that released recently, Hover has gained some accolades for its inspirations drawn from the colorful and funky Jet Set Radio. Even watching the demo and looking at the art evokes the same feeling of neon rebellion that its spiritual forefather bore.

Rather than sailing around on inline skates, you’ll take on the role of a member of The Gamers, a group of high-tech parkour enthusiasts. Stuck in a city where relaxation and leisure has been outlawed, The Gamers have decided that they need to strike back against the dictatorship that has overtaken their home and find a way to end their oppression.

While didn’t get to play the game personally, I did get to watch it and have read up a bit on it since. Having a limited edition physical copy didn’t hurt my desire to own the game, but I’m a huge Jet Set Radio fan. This just seemed like a no-brainer- and it honestly looked like a blast without even touching a controller.

Hover is already out on the Nintendo Switch and PC so give it a look if it sounds interesting or if you’re a fan of fighting “the man” in a futuristic techno-city. 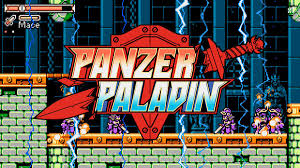 With a name the presentation and approach that Panzer Paladin takes, it’s not hard to see where Tribute Games might have gotten their name from. The game’s demo area was large enough, but it was more of an accident that I happened into watching a friend check out the game. I was hooked almost immediately. With games like Wizorb and Mercenary Kings under their belts, Tribute has been putting out some quality retro-inspired work for a while now.

While there wasn’t much to gather from the plot aside from “defending the world from the occult and demons with technology”, that was really all that was needed. Put in the position of a mech pilot, the player travels through a bunch of levels, finding and picking up multiple weapons to destroy the creatures threatening their world. By busting open walls, floors, and merely finding them throughout their adventure, players will find their arsenal expanding quickly with spears, swords, and a number of other tools.

The weapons play a larger role, though, because by choosing to break them, spells both offensive and defensive can be cast- at the expense of losing the weapon, of course. At times, the player can also choose to eject from the “Panzer” to move about as the “Paladin”, able to fit into smaller areas while being a bit more vulnerable and less versatile offensively.

The inspirations from games like Zelda II: The Adventure of Link, Blaster Master, and Castlevania are worn proudly on the game’s sleeve. It was easy to see the love for the games of the past while still trying to present an original idea that could have released right alongside them. While there’s no exact release date or release, it is expected out this year on all platforms.

While there were plenty more games on the floor to talk about, I wanted to keep this short to give just a sample of the offerings that will be coming out that I and some of my friends are looking forward to in the coming year. Does anything sound interesting to you? Were there other games you might know about or might have seen that you’d like to know more about or talk about? Let me know in the comments or over on Twitter at The3rdPlayer!