In general, horror is a tricky genre to be successful in, despite there being quite a bit of leeway as to what “horror” can actually pertain to. Sometimes, horror can be encapsulated by the visuals of a game, making for some gruesome scenes or grisly environments that can offset a player’s senses. Action-horror can give a player weapons and defenses aplenty at their disposal only to let them whittle away as the game continues. Then there are games that don’t even give you weapons, offering either environment or a host of hiding spaces to avoid assailants as you attempt to escape the encroaching danger.

Whatever the specifics are, horror games usually have the primary goal of trying to scare the player. Jump scares can be cheap but effective and atmosphere and digital disorientation can leave a lasting impression but takes a thorough followthrough to pack a punch. There is a delicate balance involving tension, foreboding, art, and programming that has to go into these games for them to achieve their goal.

One game that made this attempt was Fatal Frame, the origin point of a series that never quite reached the popularity of some of its brethren but has a well-sized and devoted following. Touting a rare “based on a true story” label on its cover, the game left quite the impression on me growing up but I never finished the original title, opting instead to play through the second entry with a friend in high school over the course of a night one summer. I’ve had fond memories of the pieces of the series I’ve played in the past, so I decided it was time to buckle in and push through the game that started the series on its quiet course into cult reverence.

Even when you know it’s evil, the anticipation of the reveal is sharp

A group of researchers disappears behind the doors of the Himuro Mansion, a mysterious manor that has gone uninhabited for some time. It is said that horrible things happened there that may not be completely of this world. The trio of scholars embarked on a journey into the mansion to figure out its secrets but haven’t been seen since.

Shortly after, Mafuyu Hinasaki ventures to the Himuro Mansion on his own determined to find his tutor and the two people who were assisting him in his investigation of the grounds. Unfortunately, his investigation doesn’t turn up with his missing comrades. He does, however, find something malevolent. Something that doesn’t want him to leave.

Enter Miku Hinasaki, Mafuyu’s sister and a young woman whose determination matches her brother’s exactly. As Mafuyu traveled to find his tutor, she has come to the gates of the Himuro Mansion to locate her brother who has been missing for some time since he left. With very little to go on, she finds the mansion, empty and devoid of any life it would seem. Among the shifting shadows and strange shapes she begins to encounter, she also finds the Camera Obscura. It is said that the camera can ward off spirits, capturing their essence so that they cannot wreak their spectral havoc and endanger the living.

With the Camera Obscura in hand, Miku must brave the haunting inhabitants of the mansion to uncover its secrets- including the fate of her brother and of all those who have walked the halls before her. 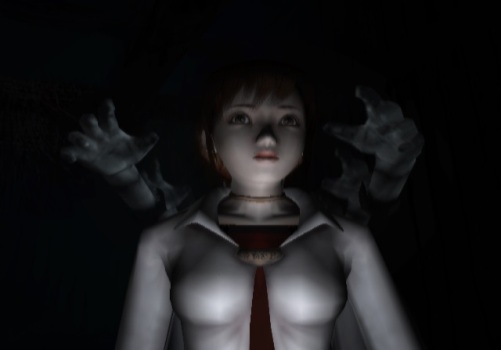 Mechanics
Taking control of Miku throughout most of the adventure, Fatal Frame places you in a third-person view of her as you navigate the halls of the Himuro Mansion. Movement follows the basic principles of most 3D adventure games, and there are a few additions like sprinting by holding down the correct button, that make life a bit easier for both escaping dangerous situations and for exploring at your own pace. Miku can interact with her environment by pressing the X button which will tell her about certain areas she is facing or will pick up items to help her on her way.

Once she engages with the Camera Obscura, Miku will have the ability to defend herself against violent spirits and capture wayward and less dangerous ones. By pressing the designated shoulder button, she will aim the camera like many games utilize an aiming button with a gun or other weapon. This will put the player into a first-person mode to aim the camera at the target. The longer they can hold the reticle over the target, the more power the camera will store up and the more damage taking a shot will do. You will know if you’re targeting your opponent correctly as the circle around them will glow a faint blue. At certain points in the spirits’ movements, they will “open” themselves up for a Core Shot, making the glow turn from light blue to vivid orange. While these moments are infrequent and only last a second, they can result in much more damage and stunning the ghost so that you can reconfigure Miku to line up the next shot. All in all, combat becomes a series of taking one shot and then escaping to a better vantage point so that she can’t be damaged as easily. 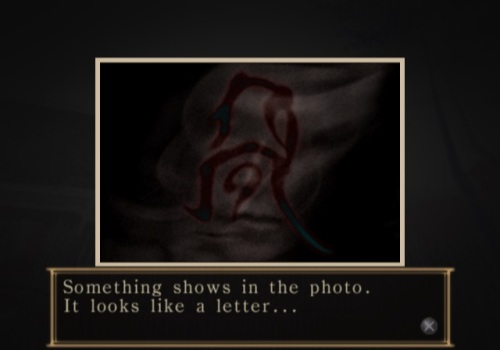 Hints can be found to lead you to your next steps

The camera takes on a few other tasks like unsealing doors by finding particular ghosts or unveiling secrets as to where the items you need to continue will be and mastering how and when to use it is important. Thankfully, the camera has a built-in sensor that will tell you when something spectral looms nearby so you can search for it. As Miku continues to face ghosts and capture them with the Camera Obscura, she will gain points that can be used to upgrade functions of the camera such as the range that it can effectively take pictures from and the size of the capture circle, making it easier to catch those spirits that move oo much to be easily tracked. With the right amount of points, extra functions can be unlocked that can slow the ghosts’ movement down or will let you see them better (since they have a tendency to disappear occasionally during combat, as ghosts are wont to do).

Despite being outnumbered and outpowered by a number of forces in the house, Miku is not without her own advantages. An easily accessible map makes jetting from place to place much easier, and she can find plenty of film of varying strengths to refill her camera with. Even more importantly, there are healing items throughout the game including the oft-found but incredibly useful Stone Mirror, an item that she can only hold onto one at a time but will shatter when her health runs out, refilling her to her maximum so that she can continue on. While the usual resource management is necessary to keep from running out of film or healing supplies, if the player explores the grounds enough, there shouldn’t be much of a problem with the items strewn throughout the mansion.

The Good, The Bad, And…
I’m going to start off by saying that there is very little that is bad about Fatal Frame. The game does a stellar job at making you feel both defenseless and empowered once the Camera Obscura is obtained. The player is rewarded for fast reflexes and being smart about combat as well as the exploration of the Himuro Mansion and its grounds. The amount of slow burn and blink-and-you’ll-miss-them frights outweigh the jump scares in the game, as well, which is more my style and feels more satisfying in general.

A solid Core Shot can change the tide of a battle

The atmosphere and lore behind the game is its main selling point. While the claims of being based on a true story are a bit exaggerated- the developer, Makoto Shibata, claims that his impetus for the game was within his own supernatural experiences- some of the rituals and topics discussed are based on real concepts. Going into detail would get a bit too far into spoiler territory, but it is worth mentioning that the teams put the story and atmosphere first in their developmental process and it shows.

I hate stretching for criticism in games that don’t feel like they warrant any, but there are a couple of things that bugged me in Fatal Frame. For one, the game feels like it can’t be completed correctly without a second playthrough as some of the optional spirits appear before Miku acquires her camera and in the New Game Plus, she starts with the camera immediately, giving her the ability to capture them. The “true ending” of the game also can’t be obtained without playing on the highest difficulty- which unlocks after the first playthrough. Even without that, the story feels complete, though, and you don’t miss much by not capturing the first few spirits unless you’re a completionist. 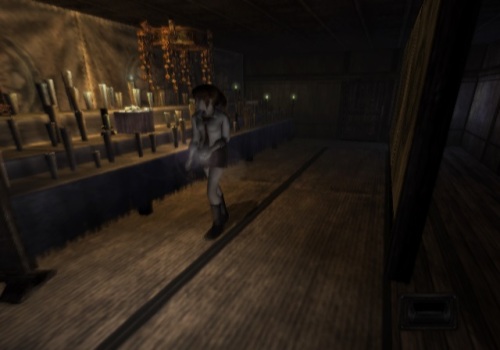 Presentation
Looking at Fatal Frame is a treat, though it can get a bit monotonous due to how limited the locale is involving the Himuro and some of the outdoor environments around it. The visual designers remedy this, though, by adding pops of color and small details throughout the dreary wooden hallways that give the game a particular style that both feels natural and lifts it from how mundane it could have felt. In action, some of the ghosts are a bit muddy. That could have been a visual choice, though, so it’s tough to feel one way or another about it. The only real drawback is that some of the flashbacks that happen throughout the game can be a bit too dark and grainy, making some important details a bit tough to see.

The weakest part about listening to the game is in the voice acting and that’s more by comparison to the rest of the game than anything. While not Resident Evil levels of cringe, the voice acting feels a bit “off” in most places, either overacted or under. The rest of the game, though, is beautifully atmospheric. Sometimes, being unable to tell whether the noise you’re hearing is a ghost incoming or just some creak or wind through the walkways is what is absolutely necessary to build tension and strike the right chords. Like most games aiming for the type of atmosphere Fatal Frame achieves, the music is generally understated and well-orchestrated, adding unease and action where it is needed.

Conclusion
It’s a shame that while Fatal Frame has a robust base of fans now, it fell to the wayside while competing with franchises like Resident Evil and Silent Hill when it came out. The original game feels a bit dated, but only because it is a good looking game from a couple of generations ago. If it had come out today, it would most likely make a splash in the cult survival horror market like its spiritual successor, DreadOut.

The game is genuinely creepy, though, and doesn’t pull too many punches. It creates a game that is just difficult enough that it isn’t unfair and maintains a chilling atmosphere from the moment the curtains rise on the Himuro Mansion. If you’re a horror fan at all, it would be worth your time to find a way to play this game to see some masterwork horror design in place. Tecmo set out to scare and engage their audience. Fatal Frame delivers elements to do both of those impeccably.