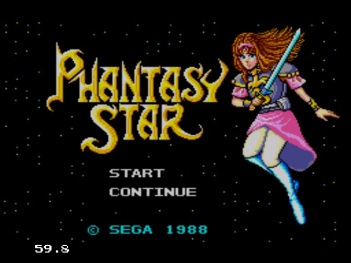 When people talk about fantastic role-playing games from the 16-bit era, the same answers tend to crop up- Final Fantasy VI, Chrono Trigger, Secret of Mana- but rarely do you hear a game from the Sega corner of the universe first out of a gamer’s mouth.  That’s not to say, however, that it never happens.

Sega Genesis has some pretty solid entries into the RPG arena, but most of them are one-offs or largely forgettable.  One series that has still had some kind of traction after all of these years, though, is the Phantasy Star series.  Predating Final Fantasy and Dragon Warrior on US shores, Phantasy Star made a splash when it came out but appears to have fallen to the wayside over time for one reason or another, subject to romantic reminiscences from diehard fans with charmed memories.

With a myriad of titles in the series across a number of systems, let’s take a look into the original Phantasy Star and the number of ways it should- or should not be- fondly remembered.  As with most story-heavy games reviewed here, be forewarned that there will be spoilers, though hopefully in short supply. 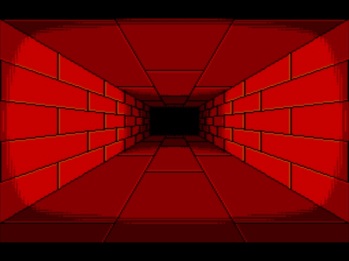 Expect to see a lot of this in different hues.

The game opens with a bang as a young man named Nero is killed for defying King Lassic and leading a rebellion against his recent malevolent ways.  His sister, Alis, hears his dying words and takes it upon herself to take revenge for her brother and put a stop to the king’s dastardly deeds.  In her journey, she will also come across Myau, a talking Musk Cat who is more than meets the eye, Odin, a warrior who is working to defeat the legendary monster Medusa, and Noah, an Esper who is secreted away to train and become a powerful mage.  The four of them travel across the three major planets of the Algol System- Palma, the green planet, Dezolis, the ice planet, and Motavia, the desert planet- to find Lassic and rid the system of evils strewn throughout.

Throughout the adventure, each character’s goals are explored and pursued, though the most centralized is Alis’ venture to stop King Lassic’s reign and oppression over the Algol System.  While the game feels confined and claustrophobic at first, certain items (and vehicles) help you explore the system physically outside of the usual mechanics of leveling up and buying better equipment.  While this means a lot of backtracking across already trodden terrain, every new portion that you open with a key or some other mechanic makes the accessible portion of each planet feel much larger. 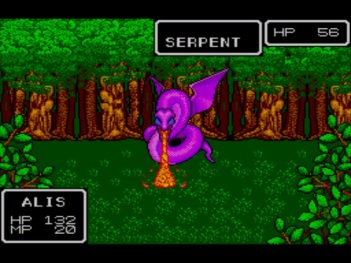 Even the fantasy flavored enemies have a unique spin.

Of course, this brings us to the unique setting of Phantasy Star.  There are not a large amount of science fiction role-playing games and even less of note.  At its core, the game acts like a space opera, but it is coated in the trappings of the usual fantasy games of its kind.  Thankfully, the veneer of science fiction design permeates enough of the game to give Phantasy Star its own identity, but there will be times where you’ll feel the familiar sense of a Final Fantasy or Dragon Warrior game.  It’s not a bad thing, but it’s one of the telltale signs that the Phantasy Star series found its thematic legs that fans of the series know so well after this entry.

As the story unfolds, the game expects what every other role-playing game of the time did and other games of the genre have dropped since.  If you want to know what you need to do next, you need to walk around and talk to everybody in towns and explore.  If you want to venture out, you need to grind to move on to the next region.  If you’re thorough, though, you can see some of the intricacies of the story.  About a quarter to halfway through the game, Phantasy Star feels like it stops handing you directions and leaves you to seek out the rest of the information you need to complete the game’s objectives.  Without a doubt, if you are playing this in the current day, you would do well to use a guide to get you from point to point. 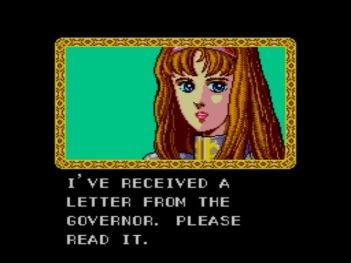 Where Phantasy Star succeeds is a matter of taste.  While the game’s exposition doesn’t give you much in the way of character, as is the nature of the early stages of the style, you do get a strong heroine in Alis Landale and an interesting roster for the remainder of your party.  Every character does get a storyline, and each of them can be completed.  Having a story driven plot and party was unique in a game of this kind.  When you look back at games like this, usually the parties were customizable and they had no investment in the story going on around them.  Not only is this party the driving force behind the plot, but Alis herself is one of the trailblazers for female main characters, and she’s an amazing one at that (which may deserve an article in itself).

Mechanically, the game has a few quirks that are welcome.  Primarily, the game has a ‘save anywhere’ feature that makes the journey marginally more accessible.  Being able to save before heading into a dungeon or even before you enter a mysterious locked door inside of a dungeon was surprising, given that the option appears to never be blocked or unusable.  As you progress, there are certain items that let you see in dark dungeons so that you can enter them and spells that let you fly back to a recently visited town or exit a dungeon.  If you explore, you can eventually find or buy items that render needing these items or the expenditure of MP to perform these tasks.  It’s nice to gain these abilities and to feel rewarded for exploration, and the key to a lot of this is making the player feel more powerful through various means.

The game falters, however, in the processes that keep it from being an easily re-playable classic like other games of the same grand reputation.  Above all- and it will probably keep most people from completing their first playthrough- is that the requirement to grind is just that.  New armor and weapons are incredibly expensive compared to the amount of money you get throughout the adventure, so you’ll be grinding for funds.  There is at least one point where you need to use a particular spell to progress, and you don’t get that spell until a certain level.  You’ll probably be grinding for that, too.  Expect to take a number of breaks and detours to keep up the game’s difficulty. 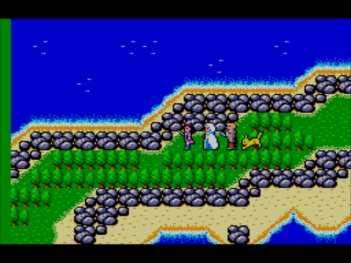 Travel from place to place can be complicated, with or without vehicles.

A lack of mapping is a deterrent to the game, as well.  If you like to make hand drawn maps, this shouldn’t be much of a problem.  The problem is compounded by the fact that each of the dungeons is the same set of bricks but recolored.  Given that Sega added mapping options into the Playstation 2 remake, they most likely agree, but given the complexity of the first-person dungeons and the amount of backtracking necessary from place to place, it’s hard to believe that no one thought having even a world map would be useful.

The last note about Phantasy Star is hard to put into a positive or a negative light.  Along with plenty of typos in translation, which was common for the era, there are some glaring context and issues that really throw off the continuity of the series lore.  A number of names have been changed, sensibly and not.  Lassic, for instance, is meant to be La Shiec while (possible heavy spoiler alert) ‘Dark Falz’ is meant to be ‘Dark Force’, which is no more creative but makes much more sense.  The main mistranslation of note, however, is of Noah, your final party member.

While many of the character names are shortened for capacity size- ‘Alis’ from ‘Alisa/Alyssa’ and Odin from ‘Tylon/Tyrone’ somehow- Noah was originally called Lutz.  It becomes stranger, however, that the character’s gender also changed in the translation.  In Japan, Lutz is strictly referred to as male while in the American version, ‘Noah’ is referred to as female and as male once or twice.  What makes this stranger is that nothing changes in the narrative to dictate any of these changes and, like most of the cast, the character appears in future parts of the series as a male named Lutz.  I’m still in the midst of researching why all of these changes happened for the character, as the only explanations I’ve found so far are that the character’s ‘bishounen’ appearance possibly threw off the American translators, but it’s an interesting tidbit that I felt warranted some attention somehow. 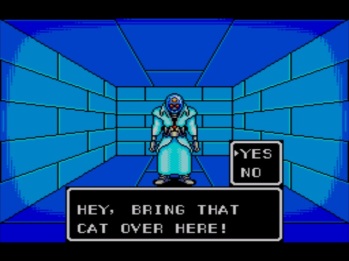 Hand over a party member to some random guy or don’t.  Tough choice.

Heading back into the analysis of the game, it looks nice, if not a bit bland.  The game shines in its ‘cutscenes’, which consist mostly of close-ups of the main cast and a few epic scenes here and there, but graphics are sharp.  Another high point is that monsters and enemies you fight actually move when they attack.  This doesn’t seem like a big deal now, but thinking back to games of that time, it was not the way of things.  Phantasy Star definitely had the most detailed and active sprites to face off against in the RPG console library at the time.

Where listening is concerned, the game falls into a very similar category as a vast amount of Sega games.  The music is decent from the earworm title music to the pump of the dungeon dwelling music.  The tune from the final dungeon of the game is also of note, being stuck in my head since I finished the game.  The sound effects, though, range from a perfect fit to abrasive.  Thankfully, the abrasive sounds are spread out enough so that it doesn’t feel like your senses are constantly being assaulted.

In the end, Phantasy Star is without a doubt another victim to time, but given the shear abundance of resources available via the Internet, this may be a title worth trudging through to experience.  If you’re someone who can’t stand extended grind sessions, you may want to look the other way.  Getting beyond that, it’s easy to see why people could have such nostalgic feelings for this game.  It has charm, it’s an outlier, and it’s a damn good time if you bear with it.  The game is easy to hunt down as it was released on the Game Boy Advance in Phantasy Star Collection along with the second and third entry and was part of Sonic’s Ultimate Genesis Collection as an unlockable, making all four Sega Genesis entries available on one disc.

For fans of the classics in role-playing history, Phantasy Star is a tough nut worth cracking into.  Do you have any thoughts on the difficulty of older games?  Maybe just on the Phantasy Star series in general?  Let me know in the comments!

Also, don’t forget that contributor ShoggothOnTheRoof has a piece on Phantasy Star IV here on 3PStart that you can check out by clicking the link!