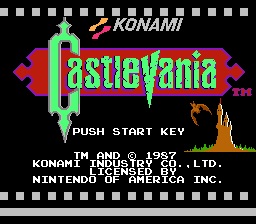 Every so often, a game spawns an entire legacy, inspiring a number of works ranging over various systems and revamps to cement their role in video game history. A number of popular properties started on the Nintendo Entertainment System. Super Mario Brothers, Metroid, Final Fantasy– the list goes on. Among those titles, though, is a little horror game called Castlevania.

Given the amount of entries in the Castlevania series at this point, it very well rivals and surpasses most of the above titles by quantity alone.  Whatever the deviations or however many times a game may re-imagine its origins, every series has its humble beginning, and while Castlevania graced nearly every television set I grew up around, I could have never imagined how much this title would have spawned going forward and how addicted I would still be to those future titles.

Going to the beginning of the legacy of Castlevania, though, how does it hold up, and what groundwork did it lay for the rest of the series? 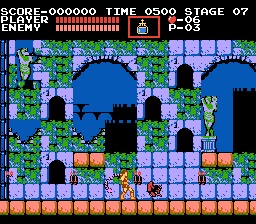 Despite aged graphics, the environments hold up well.

At the root of its story, Castlevania is about Simon Belmont, one in the line of the famed Belmont clan of vampire hunters. His family has been fighting off Dracula (yes, that Dracula) for a generation or two, and when he reappears in Transylvania as he is wont to do, it is the destined time for Simon to set out and stop him from taking away the peace of the land. Through six levels of ghouls and monsters, Simon makes his way to the demon himself to settle the score, once and for all.

Of course, this is not alluded to anywhere in the original US instructions or descriptions on the box.  The story and mythology we all know from this series is reduced to the barest and most appealing parts to its target audience. Pulled straight from the original instruction manual:

“GOOD EEEVENING!  Step into the shadows of the deadliest dwelling on earth.  You’ve arrived at Castlevania, and you’re here on business.  To destroy forever the Curse of the Evil Count.
Unfortunately, everybody’s home this evening.  Bats, ghosts, every kind of creature you can imagine.  You’ll find them all over the place, if they don’t find you first.
Because you’ve got to get through six monstrous floors before you even meet up with the Master of the House.  Your Magic Whip will help, and you’ll probably find a weapon or two along the way.
But once you make it to the tower, you can count on a Duel to the Death.  The Count has waited 100 years for a rematch.  He’s ready.  Are you?”

The draw from the first impressions of the game comes from the feeling of an old pulp horror story, but nowhere is there a mention of the Belmonts, the Vampire Killer whip, or even Dracula’s name in the introductory blurb. 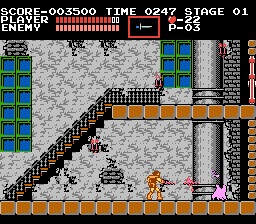 Every so often, though, the game can’t handle its visuals.

Twenty years later, Dracula still keeps coming back. Even with the current incarnations, the foundation lain by the original Castlevania does show through. Throughout the game, Simon can upgrade his weapon of choice, a simple whip, to a stronger version, as well as acquire sub-weapons like crosses, throwing daggers, timepieces that halt the world around him and, my personal favorite, holy water.  All of these will aid him in fending off the monsters of the castle with the sub-weapons being limited by how many hearts Simon collects throughout his adventure. Classic characters like Frankenstein’s monster, Medusa, and the Grim Reaper make appearances to try and stop you from reaching their master.

While I love Castlevania, I would be leaning heavily on a filter of nostalgia not to admit that it has its hurdles to play through now. Like many games of the era, the weight of the controls is palpable, and there is a certain learning curve to the physics of the game that can make certain areas unforgiving.  In a phenomenon likened to other games like Mega Man, when you jump, it doesn’t feel like you just fall- gravity grabs poor Simon by the legs and drags him into a straight plummet, which can result in a few frustrating deaths.
The difficulty also spikes, and it spikes hard without warning.  There should be very few problems for seasoned gamers to get through the first half of the game.  There’s a distinct upturn, however, that changes the game from a classic platformer to a hellish grind of precision jumping and choosing which enemies are worth the time to attack.  Castlevania becomes punishing, but it doesn’t spike up to impossibility.  If you know how old Nintendo games worked in terms of knockback when being hit by an enemy and adversaries that spawn just outside of the screen under certain conditions, the challenge is easier to navigate.  This game exercises the trials of  memorization and patience, which can be a welcome difference from some of the games of today.  It may ward away those who did not grow up with the same practices, though.

From what I’m seeing, this probably isn’t ending in Simon’s favor.

Even when Castlevania gets difficult, it rarely feels like a burden to get back to your current point when you die at the hands of these dangers. You also get as many continues as you can handle, a welcome feature that proves that Konami knew what they were doing.  The game feels so short that it would be hard to justify a password system or something of that sort.
The best part of the mechanics of the game involve the sub-weapons, and they are about the extent of the game’s customization options.  Each weapon is utilized in different ways, and they are all useful in different areas to gain an advantage in the game, but if you really enjoy one of these weapons, it is easy enough to hold onto.  You do lose them upon dying, though, so it is worth remember where you can acquire what you like.  Given that different weapons cater to different play styles, they do put Castlevania a step above the more straightforward games in the same vein.

The graphics are occasionally on the glitchy side.  Without logic, the occasional enemy would soar right through the player sprite, for example.  Overall, though, the game has a dark and gritty tone, even when the palette would dictate otherwise.  They are a nice contrast to the bright colors and sprites of many games at the time and despite campy descriptions, Castlevania does feel more adult than the bulk of the predominant titles of the early Nintendo library. Most of the monsters are grotesque incarnations of monsters we’ve all seen or heard of, and bringing them into the 8-bit gives some of them a gritty creepiness that would be difficult to depict otherwise.
The music is also really good, fitting the tone with synthesized organ music and adventuring tunes to accommodate your vampire hunting needs. Every noise from splashing to shattering glass tries to stay as realistic as possible.  The soundtrack pushes the tone of the game, aiming to hold the attention of a more mature crowd and bringing the presentation together perfectly.  The most classic track, Vampire Killer, is also one of the earliest and really sets the atmosphere with a driving beat and chords reminiscent of yet again the pulp horror feeling.

Castlevania is a classic, and it is still fun to play to this day. Though the formula has changed, sometimes for better and sometimes for worse, the game is a good solid game, even now. There isn’t much in the way of narrative, but the story is one that has held up and been built upon, and the game stood out in a time of fairly lighthearted games. Anyone interested in a good throwback to the good old days of platforming and the challenges of said games, pick this up and go to.  It really is a solid experience, despite some flaws in aging.