Early Nintendo games are not known for being horrific, at least not in the States.  Sure, some of them are dark- you don’t have to look much further than Castlevania to see that.  Where Nintendo’s prime market was located, though, was squarely in heroic fantasy.  While titles like Super Mario Bros. and The Legend of Zelda were made accessible to all ages, games like Uninvited were made more accessible to a higher age bracket by way of design before the ESRB came into play.

When you find a game like Monster Party, you can be sure that some parents were a little more surprised by what they had purchased.  Yes, the box of the game shows a variety of classic looking monsters like a vampire and a fishman.  It still looks more like a budding monster movie fan’s dream title than a disturbing romp through a bizarre world of terror and blood.  Those who played the game, though, may have found otherwise.

So just how well did this game fare in the sterile land of Nintendo’s early library? 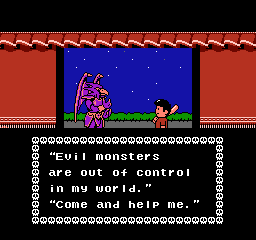 “Dude, I just wanted to go home and take a nap and have some carrot sticks or something…”

Monster Party opens on a boy named Mark who is coming home from one of his baseball games.  As he travels to what is inevitably a nice round of snacks and parental doting, his walk is interrupted by a large gargoyle-alien by the name of Bert who tells him that his world has been overrun by monsters and that Mark is the only one who can help him take care of the problem.  Without much more ado, Bert whisks Mark away to his pleasant land of pastel skies and lush green hills.

After taking care of a few monsters here and there, things go from kind of bad to macabre almost immediately.  Passing by what looks like a smiling carefree topiary, the world transforms.  The topiary, now with a shocked expression, is surrounded by bleeding skulls and grotesque figures in the background.

Things take a sharp turn for the worse from here on.

Travelling through a variety of locales, Mark can make use of his trusty baseball bat to attack enemies or lob their projectiles back at them.  While it’s not a great weapon, it becomes vital while facing off against enemies and the multitude of bosses in the game to become proficient with this mechanic to survive until the end.  At times, monsters will drop what appears to be a pill of some sort and by grabbing it- I don’t recommend eating random pills found on the viscera covered ground- Mark is suddenly replaced by Bert.  Bert’s mechanics involve flying, shooting beams at the enemy, and generally dominating the opposition for the short time before the pill wears off.  It’s a fun effect, but it does make one wonder why Bert needed Mark’s help in the first place. 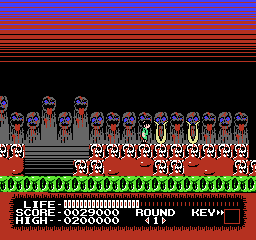 While the locales are pretty standard fare save for the aesthetics, the boss monsters are really the cream that rises in Monster Party.  Each level has a number of boss monsters and the majority of them are truly bizarre.  Some staples of horror games- Medusa and the Grim Reaper, for instance- show up to play.  Then, you end up with bosses like three piece of floating fried food, a pair of pants that walk on their own, and a pair of zombies that instruct you to watch their dance while a Taiko drum goes off above them.  One monster room even says ‘empty’, giving you a prize and tossing you back out into the world.  If one things really sets Monster Party apart, it is the minibosses therein.

While the game does gets difficult, it also never reaches the levels of masochism that some of the more infamous games of the era attained.  Maneuvering with Mark is not always a cakewalk, but the game has some forgiveness and gives enough power-ups and health recovery to temper the inherent climate of the Nintendo’s play style of the time.  As someone who occasionally has issues with platformers, I didn’t find more than a frustrating moment here and there, and they were pretty sporadic.

Not exactly clever, but it’s a sentient piece of tempura so…

The graphics of the game are okay.  While the colors are vivid and the environments are interesting to look at, they look basic and really only stand out because of the striking horror visuals.  The bosses take a little more detail into account, but even those are hit or miss, as some of their elements are tough to discern.  Let it be said that the cartoon-horror angle that the developers were going for has a charm to it, but the quality of the game’s visual offerings outside of a couple of the cutscenes in the ending are average at best.

Sound falls about in the same vein.  The music is appropriate, and it does something to push the tone of the game forward.  Can I remember any of the tunes while I’m writing this?  Not really.  Were there any tunes or sounds that stick with me as offensive or awful?  Nope.  Monster Party stands on the legs of its gameplay, and the presentation, while competent, is not going to stick with the player outside of a highlight or two.

Monster Party is a rarity on many levels.  Aside from the game’s unique tone, the game is one of the few games that was developed in Japan but was not released over there.  The story of the game’s prototype and the amount of differences between it and the finished product are vast, though most of it seems to have fallen through due to licensing in coming overseas.  The game being called ‘Parody World’ before it became Monster Party was supported by the fact that apparently, some of the scrapped bosses were a creature from Gremlins and one of the Xenomorphs from Aliens.  I can see how that may have caused issues given how Monster Party comes across, as least for the first example.  Some folks have recently worked to put out a working version of the prototype, though, that you can find if you scour the Internet enough, and if you really just want to see the changes, The Cutting Room Floor has a pretty comprehensive list here.

If you’re down for an interesting experience, there are worse ways to spend an afternoon than playing through Monster Party.  You’ll remember it for all of the right reasons, but one playthrough is probably enough.  Even if you don’t want to play through the game, I highly recommend checking out the ending to see the dark and terror laced vibe the game aimed at.  It’s not a perfect game, but it has a niche that I know more than a few gamers fall into.