You’ve Never Seen Nothing Like It – Super Nintendo – Ogre Battle: The March of the Black Queen – 1993

Let’s face facts: if you were an RPG fan, the Super Nintendo was the place to be in the early nineties.  Nearly every role-playing game that I can think of that I have fond memories of came from 1993 and the years surrounding it.  While Squaresoft was pumping out games like Chrono Trigger and Final Fantasy VI at the time, there were other companies staking land in other corners of the RPG marketplace, including their soon to be partners, Enix.

Ogre Battle: The March of the Black Queen is a game that falls into the ‘classic’ stable of games from the Super Nintendo era, as well.  While the gameplay itself might make some people shake their heads, most gamers who grew up with the system know of Ogre Battle, even if by extension of some of the later entries in the series.  I’ve found, though, that when asking people about this game, if they have played it, the opinions vary consistently.

With that said, here’s my take on the first entry to the series.

Fairies, Samurai, Valkyries – there is a broad spectrum of classes to play with

The game opens with an elderly seer asking a series of questions based on tarot cards that he is pulling.  These cards are, in a story sense, used to see how well you will fit the role of the leader of the revolution.  You see, after the continent of Zeteginia was taken over by it’s current empress, Endora, nations began to realize that her reign was a dark and oppressive one.  They have started to rebel and rise up against her forces- and that is where you come in, the soon to be leader of the uprising to end her tyranny.

Questions that you are asked by the seer- a soon to be member of your revolution and series mainstay by the name of Warren- determine not only your skills but your alignment in the game.  Whether Lawful, Neutral, or Chaotic, these answers will determine the class of troops you can lead over and which heroes of the revolution will actually follow you.  This alignment system is a pretty integral part of the game, despite never truly being explained.

Unlike in other RPGs of the time, Ogre Battle plays out with troops of up to five soldiers.  Knights, archers, clerics- there are a host of familiar concepts to play with and shift around.  After organizing your troops, equipping them, and leveling them up, you begin battle.  The battle phase of each chapter consists of deploying troops from your home base and sending them to liberate oppressed cities, talk to characters who might help them, explore the current map, and inevitably defeat the boss of the map one way or another.  By choosing a squad and an end point for them on the map, they will make a (sometimes inconvenient) beeline toward that point, fighting enemies that cross their path and finding treasures along the way. 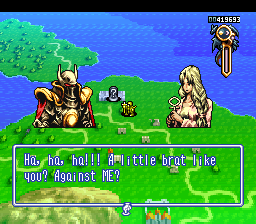 Taunts like this rarely go well for the enemy.

Once they reach an enemy, the battle plays out on its own for the most part.  Depending on how characters are arranged, they have a number of attacks and a certain method of attack.  For example, putting a Witch in the back line might have her perform one all-enemy stun attack while if she is in the front line, she’ll hit them with her staff twice before the round is over.  You can manipulate battles a bit by using tarot cards found by liberating towns, but most of the strategy lies in team makeup.

The game feels immense.  Maps can feel colossal at times, enemies are plentiful, and it is easy to lose track of where your troops are heading and why.  Thankfully, the game stays accessible in a number of ways.  You can pause regularly, giving you the chance to reposition your troops’ paths, see the stats of enemies and characters ahead of time, and generally strategize your way through the game.  Completed maps also stay open once they have been finished, making it easy to revisit for missed items and sometimes warranting new information or characters upon a second foray.  While the style and scope can be intimidating, Ogre Battle makes it simple to traverse the landscape.

Pulling cards in towns can result in good things like this- or not so good things.

If I had one issue with the game, I cannot stress enough that it was a personal qualm rather than an actual technical issue with the game: the Alignment system.  Plenty of games have them, and they are not always overt but you tend to get the idea as to how they work and how you can lean one way or another.  Ogre Battle starts that way, but it doesn’t outline or allow enough wiggle room, at times, to really let you push yourself into one Alignment or the other.  Killing enemies well below your level, for example, shifts your Alignment into Chaotic.  If you’re on a map, however, where all of your troops are higher level than most of the enemies, you have no choice but to spend precious resources to get new troops to keep your Alignment steady.  Other factors like liberating a neutral city or letting cities fall into the enemy’s hands can do the same thing.  There are a lot of factors that can affect your Alignment beyond what would be expected, so if you’re aiming for a specific ally or ending, you may find yourself frustrated.

The game makes it easy to want to pick up and play again, however, with its presentation.  Graphically, the game is solid.  Sprites are well crafted, everything is easy to discern, maps are rarely boring to look at; Ogre Battle has a lot to please the eye.  Being picky, there are the occasional pixelated effects that occur.  Seeing as this was prominent in most games on the system, it’s easy to let slide in the grand scheme of the game’s visuals.

Typical boss battle and a cool sounding spell to boot.

Ogre Battle’s soundscape isn’t anything to sneeze at either.  The music feels well orchestrated, a benefit considering the length of some of the chapters, and the battle music will not leave your head for months after, despite being one of the more repetitious tracks.  Even the canned feeling of the voice effects, from the announcement of “fight it out” when you encounter opposition to the cheers and boos of the cities as they are liberated or taken over, fits into the game’s tone.  There is some sound clipping when the vocals sound off, but again- that would be grasping at straws to find fault with a pleasing experience overall.

This game won’t scratch everyone’s itch.  The story is rich and characters are interesting, but with Ogre Battle, you get more the more you are willing to explore and experiment.  Despite the game touting a ‘Vol 5’ before it, this is the introduction to the series and a strong one at that.  Should you be willing to give up control and be happy to witness one of the multiple endings whether your Alignment lines up the way you want or not, you’re in for an interesting ride.  Procuring an actual cartridge of the game may be tricky, as Enix only produced about 25,000 copies for the Super Nintendo and the re-release on the Playstation didn’t see much more exposure than that.  Since the game was released on the Nintendo’s Virtual Console, though, if one wanted to hunt down a way to play this gem, it shouldn’t be too difficult to get their hands on.

2 thoughts on “You’ve Never Seen Nothing Like It – Super Nintendo – Ogre Battle: The March of the Black Queen – 1993”