Over the years, certain properties of companies like Nintendo have fallen to the wayside. Some of them also have a cult following, fond memories of yesteryear making for occasionally fulfilled wishes of revisiting once promising stories and characters. One title in particular, Startropics, is a title that I remember from growing up but never really playing it, despite stories about how much fun it was. It fell off my radar growing up, though. Thanks to some manner of circumstance, Startropics came back into my periphery. I decided to seize that lost opportunity from years ago and take the game for a whirl.

Startropics has a couple of flags that pop up, so far as some of my research has come up with. Word has it that this is a Zelda clone. Given that the game came up mere years after the original Zelda, that wasn’t the most promising thing I could hear, but it’s certainly not a strike against the game from the outset. There has to be some reason that the game didn’t spawn more than one sequel, though, right? If it has so many people who have such fond memories of it, it has to have done things right.

Could it be that the game was just a victim of being forgotten? Maybe it’s just the haze of nostalgia that’s left a mark on gamers who played during a simpler time?

In the most literal game of ‘the floor is lava’ ever…

From the get-go, Startropics plays out like any kid’s daydream. You take control of Mike Jones, an average boy who gets a letter inviting him to visit his uncle, Steven, on C-Island where he has been doing research. Upon arriving in the village of Caracola, however, he finds out that his uncle has gone missing. With the help of Dr. Jones’ assistant, Mike is given a submarine and a yo-yo (because how cool is that?) and prodded to go find out what happened to his uncle. Traveling the South Seas, he will travel through dangerous caverns, meet the inhabitants of the islands and help them with their problems, and ultimately find out where Steven Jones went and why he was taken.

It’s easy to see why this game is compared to The Legend of Zelda. From the get-go, the naming screen is just a reskin, and the game plays in a very similar way as a top down adventure. You even collect heart containers to extend Mike’s life bar as the game goes on. There are a few other nods here and there, but that covers most of the similarities in a broad swipe. Startropics does bring its own twists to the formula that make the game a unique experience.

Exploration has both an overworld and a dungeon view. The overworld is very reminiscent of RPGs where the character travels from place to place, be it on foot or by submarine, and persists inside of towns (where, as a note, you typically have to speak to every villager before being able to move on). There are occasionally secret paths, most of which are hinted at by NPCs, that will lead to areas you need to reach or even heart containers. They don’t always stand out, so exploration is key.

Magic Mirrors become super important in progressing through some dungeons

In dungeons, things become a little more detailed, as you get a closer at Mike, his environs, and the enemies that lurk within. Visually, the dungeons are where the majority of the gameplay happens, and they are the most attractive part of the graphical design of the game. While in dungeons, Mike can defend himself with his yo-yo- or ‘star’, as the game calls it- and he has the ability to jump, which makes dodging enemies a possibility. In a very slight nod to games like Castlevania, special weapons can be found in each dungeon. They have limited uses, but those uses can be the difference between losing a life and clearing a room. Items like Super Cleats that let you hit every enemy in the room, Baseball Bats that can pack a wallop even though you have to be at close range to use them, and Magic Mirrors that reflect magical bolts back at enemies become integral parts of the strategy within each dungeon. As they disappear from Mike’s inventory once he clears the dungeon, the desire to hang on to them for later use is hampered, so the player can feel free to go nuts with many of the items they dig up.

While the game has an overarching storyline of trying to find out what happened to your
uncle, Startropics is split up into multiple chapters, and each chapter feels like its own episode within a series. In one chapter, you are asked by a dolphin to find her son who has gone missing. In another, the daughter of one of the village mayors has fallen asleep and cannot wake up. While these separate stories feel like they have their own objectives and areas, they never feel like they are deviating too far from the task that Mike is trying to achieve. It all feels cohesive and appropriately to scale.

In true Nintendo fashion, the game is difficult but rarely in an unfair way. Certain tricks like jumping over enemies, timing attacks, and using the terrain to Mike’s advantage start to become second nature as you traverse the caverns of the islands. There is an edge to the trial and error way of things in this game, though, in that while it plays like The Legend of Zelda, you have a set amount of lives that can limit your willingness to take too many risks.

There are a few downsides to the game, as well. It definitely shows its age considering it came out over 25 years ago.

I just had to take a deep sobering breath on typing that one. Give me a second.

All right, so- Startropics has a few minor control issues. Particularly in the dungeon areas, which is where they count most, the design choices make sure, though I don’t agree with them entirely. When attempting to turn Mike, he will stay in place for a split second. If you’re trying to make a quick attack behind you or hit multiple incoming enemies from all sides, this is a useful feature and it saved our radical adventure a number of times. When an enemy is bearing down physically, though, and the only chance to avoid damage is to move out of the way, timing is hard to nail down and the control feels slippery. In short, precision moves can be tough to achieve, which is both a sign of the times and frustrating to experience in the current day.

Another glaring feature that arises in a lot of games from the time- depictions of people from other cultures. Thankfully, Startropics actually doesn’t leave as bad an impression as other games. On first glance, the character design doesn’t come off as exactly flattering. Their dialogue, however, doesn’t tend toward the stereotypical, and the situations surrounding them are pretty standard adventure staples. All in all, I couldn’t find anything that made me cringe, but I figure since the game came out on the Wii Virtual Console last year, it’s worth a mention.

Looking at Startropics, it feels like the perfect NES game. The visuals are bright and crisp. The bosses are epic and bring the 8-bit epic feeling that I remember loving from the era, even more impressively than The Legend of Zelda, if I’m making comparisons. The overworld and towns are pretty boring and feel sparse, but the dungeons and cutscenes in certain areas make the presentation shine and stand out from the pack. They are still mid-era Nintendo graphics, but they make the game a pleasant experience given their contrast to travel between locales.

This is probably one of the more busy overworld areas.

The soundtrack to the game is packed full of earworms. The Dungeon Theme will be stuck in your head for days. The same can be said for the town theme. Hell, there is even a tune that is just America The Beautiful with a few notes out of place, I assume for individuality’s sake. The music isn’t complex or breathtaking, but it gets the job done and it all feels like part of the same theme and motif without everything sounding the same. The sound effects are also basic Nintendo age sounds. Every zip, thunk, and zap feels like it came right out of the stock library. Neither a good or a bad thing, but in some cases, sounds can be jarring or eclipse the tunes of the game. Thankfully, Startropics does not suffer from this.

Startropics is a fun and challenging game, and I’m honestly glad I got to play it after all of these years. The wear and tear from the years has been minimal, and I’d recommend it to my nostalgia loving friends if they haven’t already played it. It can-

Wait. I forgot one of the most interesting features that brought me to playing Startropics in the first place!

Those who know my video game habits know that I am a sucker for physical merchandise from games. Artbooks, figurines, soundtracks- I love collectibles. Startropics had a memorable piece of immersion stuck in the package that was a physical letter from Dr. Steven Jones to Mike, inviting him to the islands. It’s neat and reading the letter, I imagine, would get any kid psyched up to go on their impending adventure.

At one point, Mike needs a code for his robotic companion to guide the submarine to where Dr. Jones has been located. Without this secret code, though, you’re stranded. Thankfully, Dr. Jones’ assistant recites to Mike that if he ‘dips the letter in water’, he will be able to find his missing uncle. Lo and behold, should one wet the letter that they received with the game, the code (747, for those not able to have an actual letter from 1990 or who don’t want to search deeper into the internet) would magically appear, and Mike’s journey could continue.

The stories about this paper that I’ve looked up seem frustrating. Getting the paper too wet would result in ruining the paper. Not getting it wet enough would result in not getting the code. Once the paper dried, there was no way of reactivating the trick to get the number again. There are a number of issues that seem to have arisen in this fourth-wall breaking (and most likely anti-piracy) piece of memorabilia. How many other games did something like this on the NES, though? There are a handful that I can think of from the PC around that time, but Startropics, further becoming a unique experience, had this innocuous seeming letter that enchanted- and agitated, in some cases- the player beyond the limits of the pixels on the screen. 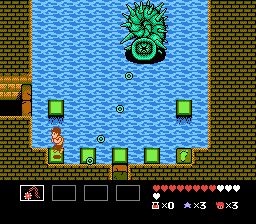 Bosses are pretty awesome and take some good strategy to conquer.

Getting back to the conclusions about Startropics: it’s a fun game and easy to recommend to fans of the nostalgic days from Nintendo. I should say that if you enjoyed The Legend of Zelda, this game plays a lot like it but with a few steps upward in terms of physical gameplay and presentation. It is worth the price on the Virtual Console, and it can be beaten, with diligence, over a day or two, clocking in at about three or four hours for the experienced player. It does boggle my mind, though, that Startropics doesn’t get as much love as some of Nintendo’s other properties from the time, though.

Maybe once I check out the sequel…

Leave a Reply to the Well-Red Mage Cancel reply