Let those words sink in.

There are a few games that fall into this category with a majority of the people who played them agreeing that the game was stellar without achieving the status that other games akin to it gained. On first glance, Eternal Darkness: Sanity’s Requiem could be lumped with heavy hitting titles like Resident Evil and Silent Hill. Those of us who have played it, however, know it has an edge that brings it into a class all its own.

I’ll make no secret of it here and now. I absolutely love this game. It’s not without its own speed bumps, but Eternal Darkness should be a staple for any horror or adventure gamer for various reasons, and you’re about to hear why.

Opening on a manor in Rhode Island, Eternal Darkness is framed in the story of Alexandra Roivas, a young woman who has come to inherit her grandfather’s property after his gruesome death. Knowing that there is something more to his demise, she begins to investigate the site, which leads her down a rabbit hole of Lovecraftian proportions.

Separating a zombie’s head from its body means it can’t see you and will start attacking indiscriminately.

As Alex investigates the Roivas Estate, she begins to find pages of a book called the Tome of Eternal Darkness. Upon reading these pages, she experiences the life- and commonly the death- of someone who has interacted with the book. These ‘chapters’ make up the unique levels of the game, as you play as multiple characters throughout history, trying to survive the tale that fate has unfolded for them. As the stories unfold, it becomes more and more clear just how important Alexandra Roivas may be to putting an end to the horror that extends beyond the stars.

The plot becomes more and more convoluted as chapters are found, and while each chapter rings in at about a half an hour or so each, they each feel unique and fleshed out, giving a chilling look into the story therein. One chapter has your character trying to track down an invisible horror ravaging your household while another has you trapped in a series of caverns, surveying to make sure that tomb like rooms can be built for what may or may not be nefarious purposes. Your objectives change throughout each level, and sometimes wind up becoming very different by the end of the character’s story. Very few of the tales end on a positive note, but they do entwine nicely. The only complaint I’d have so far as the chapters are concerned is that aside from Alexandra, there is one female protagonist of the eleven or so that you control (though representation is actually pretty decent otherwise).

Controls and mechanics in the game are pretty straightforward. There are three meters that each character has, as well, which vary from character to character. A red bar keeps track of the characters vitality, a blue bar keeps track of magical ability, and a green bar keeps track of your character’s sanity. Combat is varied a bit in that your character can aim for certain parts of the enemy, which will flash when they are targeted. This can result in dismembering enemies to disable them rather than killing them. Magic is only accessible once a character has made contact with the Tome in their chapter, and it done by finding runes, ‘circles’ to place the runes in, and slabs that detail what the

The Roivas family has close connections to the events that unfold throughout the game.

runes mean. Then, there is the sanity meter.

Sanity plays a huge part of the game, and it is the main factor that propels this game into excellence. When an enemy sees you or certain magics are cast, your character’s sanity can be drained. While it can be restored by magic or performing a brutal murder of the twisted creatures that are confronted, there are plenty of times that the meter will be drained. This, at first, results in the tilting of the camera, showing that things are a little off. Then, the game plays tricks on the character, occasionally making them lose limbs or making the enemies in the room far too large to be taken down.

If things get weirder, however, the player is susceptible, as well. In one instance, as I attempted to save my game, rather than the usual question asking if I was sure I wanted to overwrite the file, I was presented with the question “Do you really want to erase all save files on Memory Card 1?” Of course, I clicked to decline. This resulted in the cursor highlighting the ‘accepting’ choice, and the game proceeded to erase my files. All of them. In a flash of light and a burst of sound, I was back at the original save screen, my files restored like nothing had happened.

The game had pulled one over on me, and I enjoyed every minute of it- once I realized my progress was still safe.

The game is full of atmosphere and character, and that atmosphere changes depending on a choice at the beginning of the game which determines which of three beings serves as the ethereal grandmaster running the show behind the scenes: Zel’lotath, Ulyaoth, or Chattur’gha. Not only does this mildly change the cutscenes and some of the 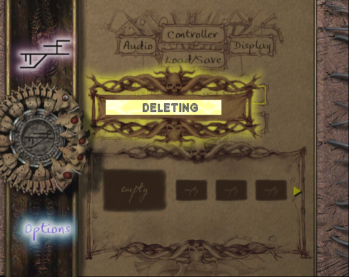 dialogue, but it changes the nature of the games and enemies. Choosing one means that enemies will have more vitality and take away more damage, one focuses on damaging your magic, and one takes away sanity and means that it will recover much less through finishing off enemies. There actually is a difference in difficulty between the three paths, but playing through each of them provides a slightly different experience. Each of the scenarios runs the same way, though, so while replay value exists, it isn’t so prominent that you’ll feel as though you’re missing anything by playing through once.

Two small things deter the experience of Eternal Darkness in its excellence. The first is that while magic is a necessary part of the game’s progression, it becomes a hindrance to the pace of the game. Not only does it recover very slowly, but when you find spells that open extra spaces to construct them, there is little explanation to constructing more powerful spells (that I saw), though it is simple enough once you see how to construct the runes you find and put them together logically. As many spells toward the end of the game drain your entire magic meter, you will find yourself running in circles to recover magic, stuck in your progress in the chapter until you can cast the right spells.

On a much less prevalent but still just as frustrating second note, the boss fights, which are few and far between, come with little to no explanation and are not easy. Some people might thrive on the trial and error of trying to figure out the patterns and weaknesses of the bosses, but others may find it frustrating to the point of putting down the controller and walking away. Admittedly, these were the only time I used a walkthrough to get some hints, and while the methods may be outlined somewhere, I certainly didn’t trip over them in my journey.

Extending its character, the game’s sound design is simplistic and effective. The sense of foreboding, supernatural horror, and sudden frights are underscored in horror movie quality. The soundtrack is interspersed with silence, as well, which can be just as unnerving and is used to an impressive end. A lot of the noises and sounds veer toward the disorienting and the otherworldly, adding to the story’s dark theme. The voice acting is 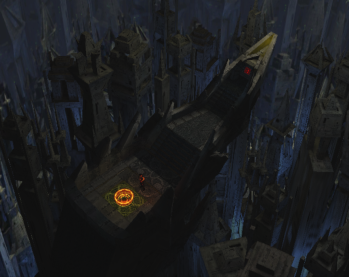 Even the unearthly locales feel closed off and limiting.

pretty well done, as well, bringing some well known names to the table to voice the unfortunate chosen ones.

The visuals of the game are beautiful, even if they feel a bit dated. Environments vary from the mundane to the gregarious, though most keep the theme of claustrophobia close, regardless of the setting. Most of the awe-inspiring visuals serve as backgrounds to the settings going on or one-off camera tricks that go along with the insanity effects, but they are spot on in their execution. The enemies do cut a striking and thematically fitting group of figures, as well.

The beauty of Eternal Darkness is that it truly feels like the closest thing to a Lovecraft style game without involving the actual Lovecraft mythos. While combat is more common than not, it rarely feels like you are safe anytime it arises. Each chapter could easily serve as its own story standing in the universe of the game. While many people wished for a sequel, all attempts at sequels have been quashed, whether through company closures or failed Kickstarter campaigns. The game was well received, had a short film contest around it, and conjures up positive memories to nearly all of the people who have played it when mentioned in conversation. In the end of everything, while it has not had a follow up of any sort (including a lack of exposure from not being offered on the Virtual Console), Eternal Darkness is an experience that should be looked into and attempted by any horror fan.