In 1992, before the years of SquareEnix, we all pretty much know what Squaresoft was doing with its time. Between Final Fantasy games, Chrono Trigger, and all of the other titles they managed to squeeze out, they pretty much dominated the RPG gaming sphere. Enix, however, did not slouch in those times, either, but you may be hard pressed to remember some of their properties from the time, as games like Actraiser and Paladin’s Quest were readily accessible on gaming shelves, but neither of them really reached the heights or longevity of Dragon Quest/Warrior.

When they teamed up to develop a series of games for Super Nintendo with developer Quintet, however, they managed to strike some now-nostalgic gold with the two that made it stateside, Soul Blazer and Illusion of Gaia. Growing up, I had played Illusion of Gaia and really enjoyed it, but Soul Blazer didn’t cross my radar until years later, what with me not realizing it was the predecessor to Gaia. According to sources, it also appears to be related to Actraiser, which isn’t too hard to connect the dots with.

So why did it fall into the obscurity that the other games around it seem to at least have a step up on?

St. Elles is a serious mess, even above the surface.

The game opens on your character (referred to as ‘Blazer’ in Gaia) being told by The Master that as one of his heavenly soldiers, you are going to be sent to the Freil Empire. An evil being known as Deathtoll has captured the souls of the inhabitants of this land, and it is now your job to free them by destroying the monsters that Deathtoll has created to guard them. The six regions of the Empire need to be revived by bringing these souls back, leading Blazer to the depths and heights of the areas to aid in defeating Deathtoll and bringing peace to the world.

If this sounds suspiciously close to Actraiser in its plot, you are not alone in thinking so. While the allegory doesn’t feel as thick with this title, there are still plenty of allusions to the religious undertones in the game. Given the departure from the half-simulation half-platformer format of that game, there is enough separation where the two do not seem to steal too much from one another.

As the game goes on, it plays a bit more like a Legend of Zelda game. As he frees souls and
the world begins to reform, Blazer will find better weapons, armor, and magic, as well as new accessories to progress in the game. A lot of the weapons and armor become vital to killing certain types of enemies or traversing certain terrain unharmed. As such, exploration and backtracking are key to being able to complete the game. Given that the levels can be complicated but not terribly long, this doesn’t feel as tedious as it can in other games of the type. There is also a sort of ‘checkpoint’ system in play, where portals

Boss fights, while fun and challenging, don’t feel as dynamic as they could.

can be opened that lead to the Master’s ‘lair’ and movement between certain areas is made much easier.

While not super innovative, each of the areas feels unique in style and ‘culture’. The laboratory level is full of mechanical enemies and becomes inhabited with plants and cats, as well as talking doors. In St. Elles, the aquatic area, dolphins and mermaids make their home as you fight through sea urchins and seahorses to bring them back. While this is complicated by the fact that each town has the same theme, they are enjoyable to walk around and piece together as you explore the dungeons in depth.

If I have one qualm with the game, it’s that it tries to do a lot with a little in the designs of the plot. The plot itself is fine, and there are some great cutscenes that you can get as you go that explain some of the events that explain how certain characters work, but it all falls kind of flat. Dr. Leo, one of the main NPCs of the game, takes some actions toward the end of the game that emotionally should strike some kind of chord, but it falls flat as the game is light on storytelling and more interested in philosophizing. The same can be said of the ‘romance’ between Lisa, Dr. Leo’s daughter, and Blazer, which is explained in a sentence or two but has very little substance. Given that at the time, the rest of the game was pretty standard fare, the world doesn’t seem to flesh out beyond the superficial. 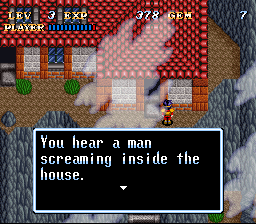 Soul Blazer is still not reaching any new heights in graphical prowess. Everything looks good but nothing stands out as being particularly breathtaking, environmental or otherwise. The game doesn’t fall into the trap of palette swapping, though, which is a pleasant surprise, and if it does, there are reasons for it and those sprites stay in the same areas to keep thematically appropriate. There are a lot of reused sprites in the towns, however, so you will see a lot of the same mermaids, soldiers, and cats showing up.

Aurally, the game is a bit of a mess. The music is serviceable. My issue with every town having the same theme aside, none of the music really grabbed me. Some songs didn’t particularly feel like they fit their purpose- please see the final dungeon music for The Dazzling Space- and even the ending theme is a 30 second melody loop that feels more like an endurance test after a while. It’s not bad, but I can’t remember anything about it, even the day after finishing the game. The sound effects don’t feel like they mesh either, including the strangely echoing grunt when Blazer is hit. Some of the soundtrack even falls prey to the issue of muting when certain sounds play, as if the sounds shouldn’t be going off at the same time. I could see how this soundtrack could be nostalgic for people who have played this game in the past, but honestly, it didn’t do much for me.

Overall, Soul Blazer (Soul Blader, in Japan, for a fun trivia fact) was not a waste of time. I

Magic comes in handy in a lot of situations throughout the game.

thoroughly enjoyed the gameplay, and while the game didn’t stand out as much more than a marriage of Legend of Zelda and Actraiser to me, I blame my expectations on story more than anything else. If you’re looking for some straightforward adventuring and exploration, you’ll be well served by playing this game. It did effectively make me more excited to go back and finish Illusion of Gaia, and even running up a five or six hour play time, it was a fun journey to wade through. It hit the spot for my need for 16-bit gaming, and I’ve had my nostalgic itch scratched for the time being.