More confessions of a young nerd blossoming: I loved shows like Mighty Morphin Power Rangers. Plenty of other shows popped up, including VR Troopers and Super Human Samurai Cyber Squad, but none of them felt like they captured the magic that Mighty Morphin Power Rangers had. When I was a kid, the idea of being a teenager chosen to become part of a world saving group that got to kick the crap out of bad guys and ride around in giant mechs.

So how did the television show, which was so rife with action and spectacle for the video game world, translate?

To those of you not cool enough to be hooked on the television show when you were younger, let me tell you how the general plot goes- and with that, you’ll have pretty much

That’s a lot of color coordination…

watched at least the first season of the show. When Rita Repulsa, the resident villain and alien sorceress who has set her sights on conquering Earth, decides to take action, a being by the name of Zordon calls upon five ‘teens with attitude’ to become Earth’s defense in the form of the Power Rangers. Wielding their own unique martial arts and talents, as well as the power to ‘morph’ into skintight color-coded uniforms to up their game, the teenagers go through five environments trying to stop the creatures that Rita has loosed on their hometown of Angel Grove.

At the end of these levels- one for each ranger, should you choose- there are two levels where the big guns come out. The Megazord, a combination of all of the prehistoric themed mechs that the teens can pilot, comes forth to wage large scale on some of the more troublesome monsters, towering over the cityscape. While the first five levels play like a Beat ‘Em Up like Final Fight, these play more like a one-on-one fighting game, which is strange but not entirely jarring given the format of the game itself.

The game itself is nothing special. It isn’t bad, but it’s not great. Unlike other Beat ‘Em Ups, this is on one plane, so it’s more of a platformer than anything, and even the platforming has very little variety. The format of each area is a segment as your regular 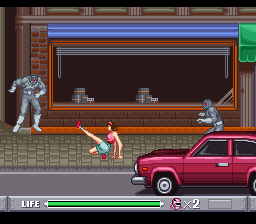 Not the worst trip down Main Street, I’d wager.

teenager- choice of any of the five rangers and seeming to have very little if any differentiation- followed by two segments as your transformed Power Ranger, and a boss battle. While there are a couple of challenging sequences, the rest of the levels are straightforward and repetitive.

On top of that, there is little in the way of attack differences with the characters. Combos are a mash of the same button over and over, and you can also jump and duck. When morphed, you can hold the Up button to do a strong attack with your weapon, and you can also press a button to set off a ‘Bomb’ (hey, that’s what the game calls it) that calls upon your dinosaur of power to clear the screen of enemies or put a heck of a hurting on the boss. The only time “complex” moves come into play are the final two levels as the Megazord, and even those are simple but integral.

That aside, there isn’t any other depth to the game. It has all of the fanservice it needs to keep the kids entertained. The heroes from the show are here, the villains are recognizable- there is no denying that this is a licensed game, even without the Bandai label all over it. It is tightly designed, as well, which is has going for it. Hit detection is spot on, which is important in games like this. Regular enemies are pretty boring, but the bosses provide a little challenge, as they should. The difficulty only really amps up during the final battle. Knowing the Megazord’s moves and maneuvering it well are important, as

But really, the monsters are the best visuals in the game, hands down.

I mentioned before, but before this level, it would be surprising if any experienced gamers lose any of their three lives.

The packaging that this is all wrapped in is distinctly “alright”. The visuals are colorful, and they are distinct, if a bit nondescript. Most of the characters resembled their namesakes from the show (except for poor Billy), and the monsters are probably the most detailed part of the game. Everything else is as you would expect for a Super Nintendo platformer. Most players probably wont pick out a favorite level visually between generic construction site, generic sewer level (which takes a few cues from the NES Teenage Mutant Ninja Turtles dam stage), and the other expected locales throughout Angel Grove. On a sad final note, each of the rangers is just a palette swap of the Red Ranger’s design, which for fans of the show is definitely a slap in the face on lazy design.

Musically, the game doesn’t stand up much better. All of the action ‘thuds’ and ‘smacks’ are there and remind you that you are indeed beating up members of the Putty Patrol (Power Rangers’ version of the Foot Soldiers from TMNT). The songs in the background are all upbeat 90s riffs with many of them being reused at the appropriate times- boss battles and entering the ‘morphed’ section of the level are the two I can think of off the top of my head. While it’s mediocre, the ending theme is still in my head two days later, so some of the tunes are catchy, at least. The best audio in the game? The title sequence, blaring a near perfect replica of the opening theme from the show.

Weapons make things slightly easier than they already are

Falling squarely on the lower end of average, Mighty Morphin Power Rangers is not an egregious assault against gaming history, and it isn’t even the worst licensed game the Super Nintendo had seen. It may well be one of the worst games to come from this franchise, however, and you may find more challenging or better ways to spend an hour or so. If you’re feeling nostalgic and you played this game growing up, it will definitely scratch that itch. Otherwise, you should probably look elsewhere to relive the thrill of the show.