I’ve been mulling it over in my head for awhile now. I wanted to do a review of a series, and preferably one that I loved for years. This is one series that I think my cohort isn’t as familiar with, and while it crossed the paths of gamers in a few different genres, it seems to have flown under the radar, except for fans of the franchise.

Today, I talk to you about the Monster Rancher series.

First released in Japan as Monster Farm in 1997, this entire series is based on the idea of raising and breeding monsters to fight.  I’m going to assume you are either unfamiliar with the series or are one of those people who wrote the game off when they saw anything about it, so let’s just talk about the elephant in the room: because this was a game that came out within a year of Pokemon after a wildly successful start to a franchise, the games were often unfavorably written off as Pokemon knockoffs, despite the dissimilarities in gameplay.

While you did have your monsters fighting in tournaments, that’s where the game resemblance ended.  You raised a single monster at a time, through different training methods on your ranch.  There were no set levels, just stats you would raise, and abilities you learned through various methods.  What truly distinguished the game was the method of your monsters acquisition, and was the defining feature of the game.

In Pokemon, you find monsters in the tall grass and capture them, or trade them, a large part of the game being acquisition to “catch ’em all.”  While you can do this in the Monster Rancher series, it’s not the games focus.  The game is more open ended than that, though ultimately you win by moving up ranks in the tournament circuit.  When you move up in rank, it often unlocks more content, generally by allowing you the opportunity to participate in battles or find items that will let you get newer breeds of monsters.

What truly sets this series apart was the way you acquire monsters.  The original premise that continues in the main series of console games is that you put a CD (and later, DVD) into your PSX or PS2, the game reads a bit of data off of it and would randomly generate a monster (or, in the instance of some special CDs & DVDs, would generate specific monsters with ??? as their secondary breed).  Monsters were comprised of a main breed with a secondary breed that would alter their appearance, and oftentimes their personalities and stats.  You can also enter a lab to combine two monsters, which would generally create a more powerful starting monster with additional starting moves, higher stats and strong loyalty.

This is, basically, what happens in most of the games.  I’ll discuss each game on an individual level.  Some of the games don’t change too much, but the games themselves do have differences.  Over the next couple of weeks, I’ll go into the different games in the series, starting with the main series titles.

The game that started the franchise.  I remember first hearing about Monster Rancher and being blown away by the concept, as my parents were audiophiles, and I had access to hundreds, if not thousands of monsters.  Friends and I would bring different CD’s to make and manage our monstrous menageries, each trying to build up the most powerful creature.

Damn right we’ll proceed. I need me some black Suezo, none of this weird hairy eyeball thing with the hair subtype.

The game has a basic plot – you’ve passed your breeders exam, you’re assigned an assistant, and you’re given a plot of land with some small basic buildings for your ranch.  Historically, the game world has reasoning why there are temples and disc stones and monsters everywhere, with mention of how the world was broken up into different parts.  Sure, some other stuff happens, but the meat and potatoes of the game is in actually raising your monster.  They don’t delve too deeply into that backstory and history quite yet, it’s mostly skimmed over and covered in the booklet.

Raising monsters requires one to first generate the monsters, which is done via a process in game that would have you open the Playstation, remove your Monster Rancher disc, and put in another CD (of any type).  The monster selection available to you at the start of the game is limited, and occasionally you run into CDs that have locked monsters at the shrine, which makes you only want to unlock them more.

Once you’ve grabbed your monster after going through your old music and retro CD game collection, it’s time to make sure you can start with a monster you’ll like, since you’ll have a bit of a learning curve.  Anyone familiar with either training simulators or RPGs can figure out the six basic stats that the game presents you with (Power, Intelligence, Speed, Skill, Defense and Life), but each monster also has a particular nature, the game takes stress into account, your own style of raising it, and what kind of food you’re feeding the monster.  It’s easy to learn, difficult to master.  You can also generate monsters off of CDs until you find a few different ones you like, and either try to crossbreed them to create a monster you really like the look of, or freeze them away to raise later. 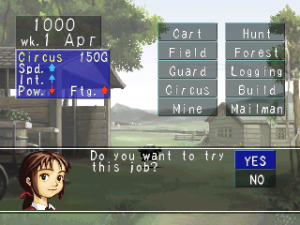 In the first Monster Rancher, training not only gave you stats, but money. The single word descriptions are all pretty good though, with the four bottom advanced jobs being my favorites.

In addition, the game occasionally presents you with “disc fragments” – pieces of ancient stone disc tablets that are meant to be used at the shrines, and tend to generate pretty decently strong monsters.  Most of the other items for monster are either “totally safe medicines” to “enhance performance” in certain areas, but have detrimental effects in others.  Forcing this monster that you have enslaved to take drugs before it fights for the amusement of large crowds to generate fame and money for you makes this game sound much shadier than it is.

One area where Monster Rancher excelled was the music.  It’s upbeat and industrious, with peppy horns and cheerful overtones.  When the music needs to be, it can dip into sadness, dour notes or depression, but even then it tends to stick with the same orchestrated instruments and go get ’em sound.  It’s an interesting soundtrack, and not one that I would listen to outside of the game, but certainly one that evokes a specific feeling.  That is something a game should strive for: not merely enjoyable, but memorable and impressionable music.

Overall, this was the core of the series.  It’s the basic concept laid out.  It’s not necessarily the most refined, the shiniest or the best done in the series, but it was relatively innovative.  This is one of the first games I can think of which generated content off of CDs, though I am the first to admit that I haven’t looked into it that far.  It had similarities to other titles, but it was unique enough to stand on its own for fans of the series, and successful enough to spawn sequels.

If it’s good enough for a sequel, it had to be decent in some fashion. I’d call it a win. 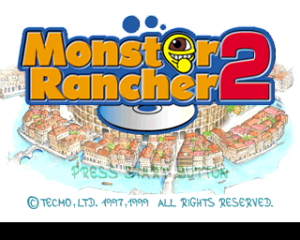 Monster Rancher 2 is, at it’s core, an update to the first game.  There is more story, you end up playing on a different continent in the same world, and the options for monsters you are allowed to start with feels almost more restricted.  The music is extremely similar to the first game, to the point where I can’t remember the differences after playing them both back-to-back to write this article.

I’m more ready for this than you can possible imagine. My Naga / Worm hybrid is ready to kick ass and chew bubblegum.

Already it doesn’t sound too promising.  This is just a setup to the reality of it, though: if Monster Rancher won a gold medal for an interesting concept, Monster Rancher 2 came back to win the Platinum.

Largely considered the best in the series, Monster Rancher 2 just does it all better than the first game.  There are many more monster families for the player to unlock and discover, the movesets on each monster family have been expanded, and the sub breeds of each of the families of monsters.

In town, they expanded the dialogue and gave each of the different townspeople you interact with a personality; your assistant also shows a bit more personality, and reacts to people differently, giving everything a bit more life to it.  For example, the man who runs the lab is large, stoic and quiet – your assistant reacts by being a bit intimidated by the blonde man, even though he is never overly rude or surly.  It’s just a touch that, again, adds some personality to everyone.

The monster unlocks that you begin to acquire end up generally being through either secret “midnight battles” you get invited to due to your increasing reputation.  One of the more daunting realities about this?  Once you get your shot, you don’t usually get another.  Screw up once, and it’s fairly likely you won’t unlock that monster, unless you are a frequent saver of your game and willing to reset and give it a second shot.  Not that it’s the case for every battle, but it’s enough to make each playthrough either a unique experience with different monsters, or a hair raising experience in paranoia. 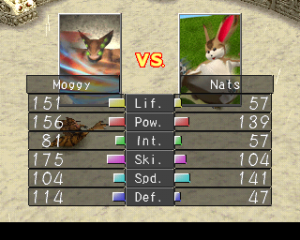 It’s not always a given that the monster with the higher stats will win, but it sure does help.

On the ranch itself, they got rid of the ability to make money by training up your monster.  If you want to make money now, you have to battle, or sell your monster on the market, or sell the random items you find or win.  Training is no longer just a small animated gif going across your screen – it’s a fully animated and unique setting for each one of your monsters, which you can also skip.

You can begin to upgrade your ranch and barn, which in and of itself helps to unlock bigger and weirder monster families for you to raise.  While out on training missions through an agency, your monster will not only gain stats and run into monsters, but they have a strong chance of finding lost ruins, which you can then explore to find additional items and monsters to fight.

It’s hard to even fully describe the updates on this game, but Monster Rancher 2 is so open ended as far as the series go, it’s replayability is just silly.  Whether you want to just raise your favorite breed of monster to have all maxed out stats by breeding literal generations of epic monsters, or whether you wish to try and unlock all monsters with their sub breeds to collect all the cards available, or simply do a speedrun to see how fast you can fight through the tournament circuit, you can either play the game in a myriad of ways with different playthroughs or just have an endless file.

While I applaud the first Monster Rancher, if I were going to recommend a first game in the series to anyone to play?  This would be it.  Seriously, grab a copy of Monster Rancher 2 if you are able to.  The original is good, but this is the polished update, improved in as many ways as one can do so.

Next week, I will continue my series overview of Monster Rancher with the PS2 era of games.

One thought on “Monster Rancher – An Overview – Part 1”