Admittedly, I haven’t had the most exposure to the Super Nintendo.  It’s not that I find it a bad system by any means, but I have a lack of exposure outside of big name titles and two player games I’d enjoy with friends.  When digging around to find out more about Ghouls n’ Ghosts, I found a spin-off series that I realized I had played back on my Game Boy – Gargoyle’s Quest.  In particular, though I had played the original game, I was intrigued to try Demon’s Crest, the entry in the series on the SNES. 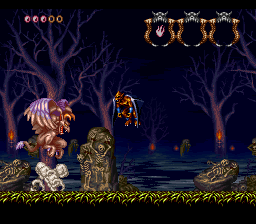 I personally enjoy the fire crest. Sure, it’s the basic one, but spitting fireballs and flying around are pretty awesome.

First released in 1994, Demon’s Crest is a sidescrolling horror platformer that stars Firebrand, a winged devil that appears in some of the Ghouls n’ Ghosts games (and it’s spinoff series).  You were on the hunt for Crests, magic stones attributed to six different elements (Earth, Air, Fire, Water, Time and Heaven).  Legends among the demonfolk said that when all the crests were combined, a seventh crest would appear: The Crest of Infinity.  It would allow the holder to conquer all realms with it’s infinite power, which was otherwise not described.  During this hunt, you were weakened by another demon during your search for the sixth crest (Heaven), and were then attacked by one big jerk of a demon named Phalanx, who proceeds to steal all of the crests and lock you away.  For reasons unknown, he gives you the crest of fire at the start of the game, and releases you in the dead of night to fight a zombie dragon – easily, one of the more startling starts to a 16 bit game that I can remember.

During the course of the game, after the initial level, you are able to explore an open world by flying about, with six main areas to explore, each of which you can play through as often as you want.  This means once you acquire new crests, you can go back to items to get items and explore areas that were inaccessible before you received a crest that would let you enter.  The game itself features light RPG elements, allowing you to change ‘classes’ by equipping different crests, make use of vellum scrolls (spells), drink from urns (potions) and of course, to use talismans (…talismans). 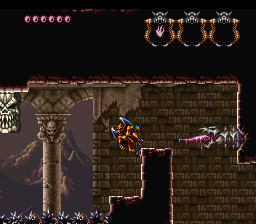 Wall clinging: no longer just for spiders and men.

The gameplay was as horrendously difficult and enjoyable as other games in the Ghouls n’ Ghosts series.  Your basic abilities include gliding forward to fly (though being unable to rise upwards), spitting fireballs and clinging to walls.  Equipping a different crest will give you different abilities – for example, the first crest you obtain, the Crest of Earth, gives you great strength and transforms you into a Ground Gargoyle.  You can then charge and tackle enemies, which would also allow you to break certain objects in your way.  In lieu of your fireball, you gained a ground tremor flame that would travel along the ground in a straight line.

One of the interesting aspects of this game is motivation.  When it came out, most games were still very much in the camp of you playing the hero.  Demon’s Crest doesn’t really appear to be doing that.  Your motivations are left unspoken, which means… and let’s be honest here, playing as a demon… you’re probably just out to gain ultimate cosmic power.  Since it’s left unspoken, I can only speak to it as conjecture, but I think it makes Firebrand into a fun anti-hero.  The graphics and gameplay are dark and ooky-spooky to the max.  Let’s face it: the game is set in freaking hell.  They don’t out and say it, but it’s a surprise when you consider this is a company that was releasing Disney games and megaman.

As I mentioned, this game rides the line between difficult and enjoyable.  The frustrating part of the game is when enemies end up respawning the moment you step forward and then back into their respawn point in the style of similar horror platformers.  On top of that, enemies end up having generically similar attack patterns, so once you’ve figured things out for one enemy, you’ve kind of gotten it for all of them.  Spending time in the menu to switch between forms can get grating, and some of the vellums and urns aren’t useful.  Just to nitpick on one other point: the music was generic as all could be believed.  You will not be missing out anything if you decide to pop on a podcast or album while playing.

Demon’s Crest was an obscure title that should have found more life in game shelves and home consoles.  I think it’s become better known as time has gone on, but as a cousin to a popular retro series, I think it’s definitely worth a shot.  Other than SNES, this game has been released on the Wii U virtual console, where it’s still currently available.  For a game chock full of secret bosses and challenges, it’s completely worth picking up.