The Best Legends are Complicated – Sony Playstation – Legend of Mana – 2000 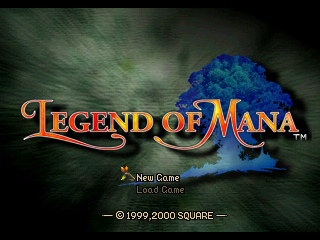 As we’ve seen in the past, when a series tries to do something drastically different, it winds up creating two schools of fans in its audience. There are the people who wish that the series had stayed on the same track because if a formula is working for something, why try to mess with it? Then, there’s the group that believes the company behind the game was attempting something innovative and, for better or worse, they are happy that there was attempt to make something greater than the source material.

Legend of Mana tends to fall into this category of sequel. While most seasoned gamers could tell you about Secret of Mana (and possibly Secret of Mana 2 a.k.a. Seiken Densetsu 3), when it comes to Legend of Mana, many people have either heard of it in passing, remember trying to play through the game and giving up out of frustration or will gush about the game any time the chance arises. Being that I have now watched the game played through multiple times by people in my apartment, I decided to pick it up and play through it myself. I have to say that I definitely fall into one of the above schools of thought. Can you guess which one?

In this iteration of the Mana series, the world of Fa’Diel has fallen into desolation, the product of an ages old war between various races and factions. While the Mana Tree has slept, it has helped preserve the nations and locales of the world by encasing them into 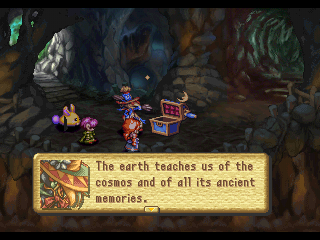 There are plenty of quirky and mystical characters to experience in the world of Fa’Diel.

artifacts. As the hero and ‘fated one’, it is your task to revive the world and follow the plots unfolding to ensure that the same thing will hopefully not happen again.

The beauty of the plot of this game is that it is really made up of various smaller plots involving Fa’Diel’s peoples. The most prevalent storyline revolves around the Jumi, a group of people who are persecuted and hunted by some for their precious stone hearts. Other plotlines involve the war between two Dragoons and their opposing leaders and a story of four friends who grew up together, only to be torn apart by ideals and star-crossed love. They are all fairly engaging, and there are a number of smaller and less consequential storylines that play out to varying degrees of success in storytelling.

If you are looking for a continuation of the tone from Secret of Mana, you will not be disappointed in this game. The story is deep, sometimes surprisingly so, and it can be very emotionally investing. It plays a lot more like an open form game, along the lines of Romancing SaGa. This can create some issues of being in the wrong place at the wrong time for a storyline to continue, but it is usually negligible. The game, overall, plays out in about 60 or so scenarios, most intertwined within short plots that wrap up neatly over a short time.

Plenty of trappings of the Mana series are present here. Elementals are referenced throughout the game in various ways, and your character can utilize a multitude of 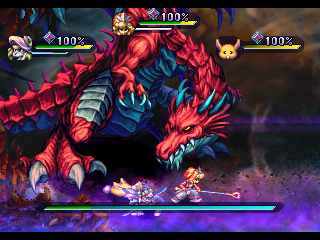 Yeah, no- this’ll be a breeze.

weapons. Rabites run rampant, and chocobos even make some appearances. While there are no direct ties readily apparent to other entries in the series, the lore and conventions that mirror other Mana games makes the game feel like a ‘welcome home’ for fans of the series.

There are also plenty of things to do in the game outside of the usual running around and engaging in combat, such as forging weapons, making golems to help you, capturing pets and hatching them, or making instruments to cast magic. You may or may not engage in these- honestly, in my quick playthrough this time around, I only played with the forge and instruments, briefly taking whatever pet I happened to find in the field- but for the folks who enjoy those distractions, they can pay off and are multiple in number.

I really could go on for a good while about how good the game is. While you are always confined to a party of three, your main character included, the characters come in and out with their own weapons and styles of combat, making it possible for you to have your favorite co-combatant and pet fight alongside you in the final chapters. This can get somewhat irritating, depending on your choice, as anytime you enter your home base, your companion leaves and you must return to where they stay in the world to have them return to your party, but it can be a minor inconvenience, and there are plenty of readily available partners that are convenient. 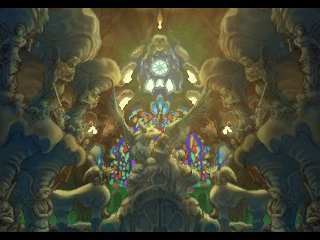 This game really is just mind-boggling in how gorgeous it is.

The downsides of the game are really small and easily overcome. Combat feels kind of
slow, but given that the game is not incredibly difficult, it does not feel like a hindrance. The map layouts can also be a pain, especially if you are relying on shops for any reason. Many towns can span five or six screens, and when shops are not always marked as such, it can be a pain to track something down.

Occasionally, partners can accidentally steal your well earned experience points (in the form of crystals that fall when some monsters are defeated) which can be a frustration, but they do not fall into the usual AI pitfalls of the time. The only real downside would be a matter of taste. The open-ended format of the game is not for everyone, and while it is not nearly as finicky as the format in the SaGa games, it can daunt players who are looking for a more linear story as the rest of the series tends to follow. If the idea of roaming around and doing thorough explanation to progress various storylines doesn’t appeal to you, this may not be the game for you to indulge in.

In Squaresoft’s prime, they were powerhouses of visual and audio media. Not that they have been slouches in recent years, but in all honesty, this game is probably the apex of their stylistic endeavors. With very little possible contest, this game should take the award for the most gorgeous game on the Playstation. It truly feels like the style of Secret of Mana reimagined in fairy tale hand-drawn watercolor, vibrant shades of green and jewel tones 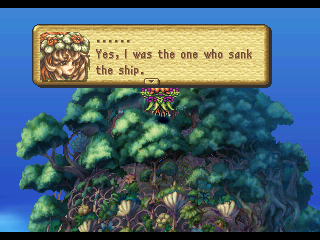 However much time you spend with certain characters, they are rarely two-dimensional.

invading the environments and characters. Every region is a joy to experience, whether fighting through it or watching the plotlines unfurl. The music in the game, under the direction of Yoko Shimomura (one of my favorites, so I am biased) is well worth the experience, as well. This stands as one of the only soundtracks I have purchased to be able to experience as often as the mood strikes.

Legend of Mana is a strange beast, and it is no wonder that the game has fallen to the wayside in Square’s prolific timeline. It was SaGa without being SaGa and Mana without truly feeling Mana at its core. If you are put off by the non-linear manner of the game but really want to experience an understated masterpiece of Squaresoft history, pull up a walkthrough and check Legend of Mana out. It is well worth the time- only about ten to twelve hours with guidance- and brings some interesting things to the table that are worth taking the chance to feel out and at least try to embrace.