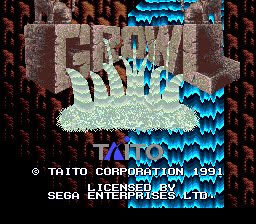 It’s somewhat rare nowadays to find a game that tackles tough issues. Every so often, we see Mario fighting pollution or a stray Scribblenaut picking up trash, but back in the day, there were so many games that fought against drugs, littering, robots- you get the idea. Even fewer, however, dealt with the rampant issue of ‘poaching’. Okay, so it’s not exactly ‘rampant’, and Sonic the Hedgehog loved to saved animals from dire fates, right? Well, had he done it with an array of weapons and explosions complete with bloodless limb-flying, I think it may have been a bit more poignant. With that descriptor, I present to you Growl for the Sega Genesis.

If the premise sounds a little over the top, it really only goes downhill from the beginning scenes. At the beginning of the game, you can choose from four different characters- Gen, Jack, Khan, and Burn- each with their own attributes, though I assume it’s not much different playing as any of the four. While sitting in your favorite bar, a group of ‘poachers’- and I use that term loosely, for reasons we’ll discuss soon- comes by and blows it up. Thus, your adventure begins as you free all kinds of animals from their evil clutches. It’s sounds like a simple premise, right out of an action movie. It becomes, though, something out of a kid’s creative writing project. I don’t want to ruin the ending for you, but it has to do with a ‘creature’, and we’ll leave it at that for now. 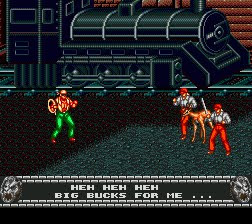 It’s like they *want* you to beat their faces in with these puns.

The main draw to this game- which, from what I’ve read, was called Runark in Japan- was that it had a bevy of weapons, and I can’t fault them on that point. It’s got everything from whips and batons to machine guns and rocket launchers. Most of the weapons even function differently than one another. My favorite weapon, the whip, let you hit enemies in front of you and, when you pulled it back, hit the enemies behind you, as well. In most video games, the weapons can prove to be a hindrance, but in this one, it’s quite the opposite.
Another big draw of the game is that it places the player in the path of nearly a dozen enemies sometimes. Thankfully, these ‘poachers’ don’t have nearly the longevity of enemies in other games, so defeating them isn’t much of a task until they converge on you. Even better, when it comes to defeating them with, say, a rocket launcher or a pipe bomb, you can destroy a score of them in a flurry of explosions and body parts. This game was definitely made for the ‘OMGWOW’ factor that was so hip at the time. Exploding people? Who didn’t want that in the 90’s? In fact, with a game this awesome, what could go wrong?

First of all, the game is super short. To be fair, it’s a beat ’em up, so that may not be a valid concern. I felt like I had just started by the time I found the last boss. Even the last boss wasn’t terribly difficult. Mind you, this is coming from someone who, while loving beat ’em up games, is not all that great at them. Yo get three continues, two of which I used, but my life bar didn’t decrease much. Maybe playing as Burn did that for me, since he had the most life. That’s the only conclusion I can come to.
Another issue I had with this game was that the unarmed combat was pretty useless. In a fighting game, that’s kind of an imperative to work on, even if your main draw is the sheer amount of weapons at the player’s disposal. Throughout most of the game, this wasn’t a problem. There were a couple of sections, though, that forced the player to play without weapons (and ruined quite possibly the coolest and most inventive level in the game), and it was definitely a weakened experience because of it. My whole hearted opinion is that a fighting game shouldn’t be weaker because you’re unarmed.
My other problems with the game are mostly what I’ve read in other places. The game itself is fine. It was ported over from an arcade version and holds m 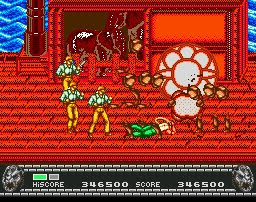 That could be a person exploding… or a stick of dynamite… or a duck, I don’t know anymore.

ost of the same elements. However, the Sega version of the game does not have voice acting like the arcade machine apparently did, has dumbed down graphics, and is only one player whereas the cabinet let you play with four. Now, this game could have at least been two player, but even that got copped out on! I remember the main reason I used to play beat ’em ups and it definitely wasn’t to play alone. You got a friend and you kicked some ass!

…I’m sorry. I got carried away. This game can do that to you.

In any case, it’s popular opinion that the game was massacred on its way to Sega, so there are plenty of drawbacks. Now, are there any highlights? Kind of. The game itself certainly is not boring. It’s got enough explosions and action to fill an entire Michael Bay movie and then some. The fighting is also pretty gruesome sometimes. I’m not necessarily saying it’s a ‘plus’, but you have to admire the balls on a game that will let you fight all ages and genders, especially for the time. Again, to avoid any controversy, I’m not saying that I liked the action, but the fact that they did it at all in a time of heavy scrutiny on video games.
My favorite part of the game was that when you would rescue animals, they would come to your aid in another part of the level. For example, you save a deer from being beaten and, a few screens later, a group of deer stampede across the level, crushing your enemies. Not to be outdone, however, when you save an elephant from the poachers, not only does he follow you around the next screen or two, obliterating your enemies, but he brings about quite possibly the best scene in the game- okay, second best. My favorite is still when the first boss says ‘Get out of here, you wisp’. I’m a sucker for typos in video games.

Sad but true, that covers about all of the good stuff in Growl. Even the front is is pretty unimpressive. The music that plays throughout the game is boring, even when it’s t 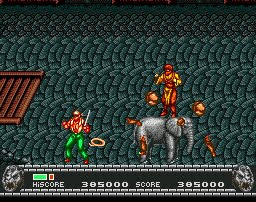 Pictured: An elephant literally running through a dude who bursts into people bits.

rying to be the driving soundtrack that most BEUs have. It also only changes for a boss battle, and even then, it’s not great music. I can’t even think of a part where I said ‘hey, this music isn’t bad’. The sound effects were nothing to write home about, either. All told, I probably could have played this game on mute and still had the same experience.
The graphics on the other hand- are still not fantastic. They certainly aren’t below par, but there is absolutely nothing special here. The enemies are- varied, to say the least. You’ve got your newsies, your stereotypical Indian men, and your women in tight clothes. Why, oh, why are these stereotypical fighting pieces- well, first of all, why are they considered ‘poachers’? They’re abusive, for sure, but none of them fit any sort of ‘hunter’ or ‘poacher’ bill, and the worst thing they destroy is your favorite watering hole. If anything, they’re arsonists. Secondly, why does everything explode? I chalk this up again to the ‘OMGWOW’ factor, but the graphic is so overused and the screen flashes so often, it just comes off as annoying by the end of the game. I was most impressed when people started exploding, though I couldn’t understand why poachers would attach bombs to themselves.

Overall, this game gets a shrug and a pat on the shoulder as it slips back into obscurity. It definitely doesn’t stand up to the test of time, as I can tell you right off this game would have been ten times as cool fifteen years ago. The appeal now, though, is over-the-top and kitschy, which at least makes it interesting, if nothing else. Do I recommend it? If you’re bored, why not? It’s not going to revolutionize anything for you, at least in its Genesis format, and it will only take up a couple of hours of your time. I’ll warn you, though- you won’t find anything better than the ‘elephant rampage’ level.