I tend to have a dry sense of humor. Despite this, I find humor in a variety of different comic stylings, and as long as something is done well, I tend to have a good chuckle.  Humor in games tends to be really hit or miss for me, though thankfully, this game pulls off a lot of different things well.  Cthulhu Saves the World is an homage to 16-bit RPGs of yesteryear, while at the same time playing as a modern indie game.

This… this is the premise of the game. After Cthulhu learns that is what he has to do from the narrator, of course.

So first and foremost: this game has a heavy sense of humor.  It does a lot of lampshading on your typical JRPG tropes, is extremely self aware in that charming old school videogame humor (Cthulhu will, for example, get into an argument with the narrator), and likes to break the fourth wall (if there is one).  While I do groan, since there are a lot of groaners, I am highly amused by this game.  It’s fun, it’s quirky, and it’s got some good gameplay.

This game was released by indie game makers Zeboyd Games, and is the spiritual sequal to Breath of Death VII (an excellent game in and of itself, albeit not as polished as this title).  They originally released it for Xbox 360’s live indie store at the very tail end of 2010, and the next year for PC via Steam.  It’s currently still up and available on both.

I’m a sucker for Lovecraft… I groaned pretty hard at this description.

Gameplay wise, it’s like a standard JRPG with modern features.  Combat is split between normal attacks, which build up combo multipliers, techniques (some of which build up Combo, some of which spend it), and abilities (which tend to be spells).  You also have Combination techniques – unique specials that two characters can pair up to do.  As characters level up, you are given different options on how you’d like them to focus – while characters tend to be strongest either with magic or strength, you can focus on whether they attack every enemy, or focus on a single enemy.  There are a myriad of statuses that can effect enemies, but the most important one to note is Insanity.

Insanity generally makes an enemy stronger, but miss more.  On top of it, it tends to buff different abilities and techniques used against them, making insanity an effective tactical inflict.  While not all party members benefit from this (about half of them do), it’s usually the best idea in a fight. 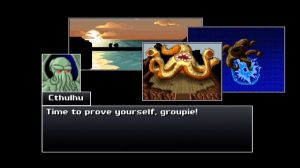 Some bosses get fun cutscenes. Cthulhu is also kind of a jerk to the rest of the party.

Random encounters have been partially taken out of the equation.  In each area, you have a set number of random battles you will have to encounter.  Ever.  You can choose to fight over that number, but once you’ve hit it, you are all set.  You can initiate random battles inside of your menu, including after the number has been hit, but you’ll no longer have to face them on that particular map.  It’s an interesting take on it, and generally what I hear people being divided over when it comes to gameplay.  I personally enjoy it – I try not to obsess about it (although admittedly, when I hit single digits, I will purposefully finish up random fights).  It’s harder for other people, since they see the number, and they just want it to hit zero.

Equipment in the game is done simply.  You have a weapon, and you have armor.  That’s it.  On top of it, all items have been thrown out the window in favor of just having Potions, which are helpful in battle.  You recover all HP and a small portion of your MP after each battle, so you do have to be conservative about MP usage, since there is no guaranteed return over even the lowest cost attacks.  You can easily recover MP once you hit a designated save point, though you can save anywhere in the game world (at least in the steam version). 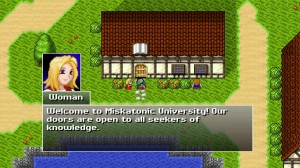 The game is unsurprisingly chock full of references to ol’ Lovecrafts works.

One fun surprise I noticed in battles is the descriptions.  They’ve written an amusing 1-2 liner about every single thing in the game.  Every single random monster encounter.  They aren’t all winners, but that’s a lot of jokes, and I have to dish out the credit where credit is due.

Music in this game is fun, but unfortunately can be a bit repetitive.  I don’t remember a lot of variety in it – while I liked what was there, it ended up just being the same looping tracks and random noises in battle.  I honestly turn on a podcast or listen to other music rather than the game when I play it.

For your party, you can have a total of 4 people at any time, but you will acquire 8 characters – starting off with a young woman who has fallen madly in love with your hunky octopus-dragon-man, and continuing to be just as interesting from there, including a wayward misunderstood goth necromancer, a space cat with an unnameable gender, and a magically animated talking sword.  They do a good job of each having their own personality, and all of the characters have their own strengths and weaknesses. 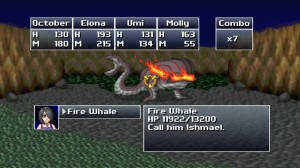 I laughed at this far harder than I should have.

The best part about this game is the price.  It is seriously freaking cheap.  I haven’t checked Xbox Live, but on Steam, you can currently buy the combo pack for Cthulhu Saves the World and Breath of Death VII for $3.  And that price drops during sales.  The gameplay itself is good, but the writing is hilarious.  It’s an amusing game, and though it only runs about 10-12 hours, there are additional modes you can unlock, including the evocative “Cthulhus Angels.”  I’ll let you figure that one out.