Somehow? I did not die after taking this screenshot.

Ahhh, October.  Easily my favorite time of year.  I grew up and live in a city that treats the entire month as an opportunity to prey upon tourists – every day of the month is Halloween, and an endless stream of people come into the city to enjoy that atmosphere.  It will come as a surprise to no one that knows me that, while I loathe crowds and touristy kitsch, I am a huge fan of horror movies and videogames.  For this creature double feature, we can start with one of my favorite series, before delving into a fantastic standalone game.

A Scare in Your Underwear: Ghosts n’ Goblins

You end up in your underwear a lot. It’s pretty scandalous.

One of the first horror games I was exposed to was the fiendishly difficult Ghouls n’ Ghosts, sequel to the much beloved Ghosts n’ Goblins arcade game.  Once I realized they were related, I was excited; a series of games was a new and interesting concept to a kid who hadn’t seen one before.  Other than as one of the early horror series to grace arcades and consoles, it’s well known for being difficult.

Some games like to ease you into the waters.  Some series are difficult, though monster spawns and patterns can be fairly predictable.  Ghosts n’ Goblins manages to start you running out of the gates at a level most games considered to be utterly insane.  I mean sure, you have games where it’s fluctuating in difficulty, but its almost charming how you are pretty much guaranteed to die repeatedly in a horrible and bloody fashion at the ends of claws, spells, fangs, talons and anything else under the skies, hundreds if not thousands of times before you beat the game.  The gameplay just teeters on the edge of impossibility, perching comfortably on its shoulder – and stays that way from start to finish.

Called Makaimura in Japan (which translates into roughly “Demon World Village” in English), Capcom made a fantastic series with this one.  Starting off with Ghosts n’ Goblins in 1985 for the arcade, the game stars you in the role of Sir Arthur, a knight trying to rescue back his girlfriend Princess Prin-Prin.  Because every game has princesses in dire need of rescue.  This storyline is pretty much cut-and-paste for each of the games in the series, with Sir Arthur running off with his trusty lance to fight hoards of demons, undead and monsters of all stripes, but it’s not the storyline that keeps drawing people back: it’s the gameplay.  The only power ups involve new weaponry, and suits of armor.

Ghosts n’ Goblins was followed by Ghouls n’ Ghosts in 1988 starting in the arcades, before being followed by Super Ghouls n’ Ghosts on the SNES in 1991.  The primary series was finally revived again, with Ultimate Ghosts n’ Goblins being released on the PSP back in 2006.  There was also a sequel for a Japanese game system called Wonderswan made by someone other than Tokuro Fujiwara [the genius behind the series], and a few iPhone games; admittedly these are games in the series that I’ve never played, but I always find it worth mentioning.

Protip: don’t pick up the torch until you have a good handle on the game.

Ghouls n’ Ghosts brought about what I can only describe as a joyous upgrade to the game in the form of allowing you to throw your weapons up and down.  Super Ghouls n’ Ghosts allows you to double jump as well, even changing direction mid-air, along with making your vertical attacks.  I’d say the original three are what I would think of when I hear anyone talking about the game.  Monsters can spawn anywhere on the screen at any time, and kill you in two hits with little effort.  The first hit leaves you in your underwear, which was their way of lessening the horror factor by brightening the game up with a bit of humor – the second hit leaves you as a pile of bones.

Ultimate Ghouls n’ Ghosts is mostly the same.  The graphics are easily the best of the bunch in that cool space between 2d and 3d that a lot of PSP games have.  They did cave to make the game accessible to normal human beings rather than rabid fans of the series, and made the default mode give you a life bar (though traditionalists can change the difficulty to Ultimate, making it as rage inducing as the originals).  The one departure they made in the PSP version that I strongly disliked wasn’t the RPG elements (I do enjoy them to an extent), but the need to have to run back through a level on an item hunt if you miss the gold rings needed to get to the next stage.  It just feels like it was tacked on to pad in some extra hours onto the game.

Overall?  This series is difficult.  It’s grueling.  Anyone else in your home will be wondering why you’ll be howling with rage at your game system of choice.  Yet the series is worth it.

My hard drive is haaaunted, and I lost most of my screenshots for the game!… alright, I had to do a hard drive restore. Let it slide this one time guys.

I am a zealous reader of H.P. Lovecraft.  Considering my nom de plume on here, it shouldn’t be such a shocker.  I used to help run a LARP, where one of the primary themes was Lovecraftian horror.  I grew up in one of Lovecraft’s favorite locales.  I am sure it comes as a surprise to no one that I have always tried to hunt for games that capture the feeling of creepy, macabre hopelessness in the face of cosmic evil.  There were a few titles over the years that attempted to capture the essence of his writing, or the feel of his stories, and quite a few were good titles.  Call of Cthulhu: Dark Corners of the Earth was one of the later titles before the surge of the modern era brought about game attempts in all genres to get a feel for that mind-crushing Lovecraftian horror. 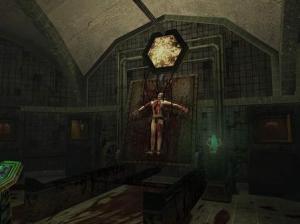 Released first in 2005 for Xbox and then 2006 for PC, this FPS Survival Horror game casts you in the role of Jack Walters – a police detective for the city of Boston in the prologue set in 1915, and later a private investigator some years later in 1922.  The real gameplay begins as he takes up a missing persons case in the infamous coastal town of Innsmouth Massachusetts, to try and find an out of town employee at a grocery chain who has gone missing from the xenophobic community.  The lovable locals will often croak at you to leave, and the game starts off with a nice atmospheric setting as they’ll follow you about, staring all the while.

While you can eventually shoot at things, it’s often a better idea to use stealth and smarts to get through a situation.  Save points are scattered throughout the game in the form of The Elder Sign (the developers apparently favor the star with a little flame inside over the tree), ensuring that you won’t be set back too far should anything happen.  The game doesn’t feature a HUD as in a traditional FPS – you’ll know your hurt from the stumbling, grunting and gasping.  You’ll know your out of bullets when your clip is empty.  Much like in Eternal Darkness (another well done Lovecraftian title), you’ll know you are losing sanity when… well, I’ll let you see that one for yourself.  It’s pretty fantastic in that regard, though it does add to the difficulty. 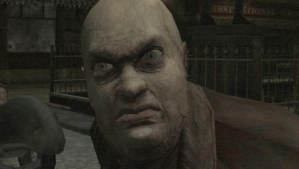 Much of the games plotline is based on H.P. Lovecraft’s The Shadow Over Innsmouth, with some scenes pretty much lifted straight from the story.  A strong subplot in the game involving the ever lovable Great Race of Yith has plot elements in tandem with H.P. Lovecraft’s The Shadow Out of Time, though this is less prevalent in the gameplay if you aren’t familiar with the author.  In fact, while the game is based in his writings, you don’t have to be familiar with his writing at all to enjoy Call of Cthulhu: Dark Corners of the Earth.  While it was fun to play “spot the homage,” I may have even gotten a little more out of the game if I didn’t have a strong idea of where all the plot was going.

With that being said?  The graphics are a bit dated, which is to be expected from most modern 3D games.  The soundtrack helps to heavily contribute to the games atmosphere, and holds up well.  The game itself is all about the atmosphere over jump scares – you are going to want to play this in the dark with the lights off to get the full effect of the game.  It’s readily available on Steam for a mere $10, and well worth the money.

The game provides an unforgettable experience in the horror genre.  If you’re a fan of Lovecraft or just a fan of survival and stealth horror, give the game a play.  You won’t regret it.