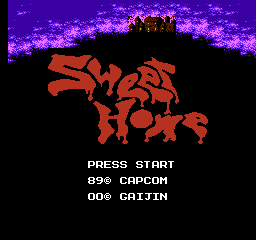 I have always been a fan of RPGs and survival horror games. Tracing them back, you can find plenty of interesting works along the way, and Capcom had given its due to the genre as well with Resident Evil. Tracing back to 1989, however, brings up an interesting experience known as ‘Sweet Home or (Suito Homu), depending on your native language. It has picked up a bit of a cult following with its strange origins and extremely well translated entrance to American gamers in 2000.

Sweet Home was released in tandem as a video game and a horror film in Japan. The trailer even advertised for both the game and the movie, connecting the two directly. The game and movie follow the same basic plot, but they have their intricacies. To be honest, checking out the game and an in-depth synopsis of the movie made me feel like it was the complete experience, and maybe that was the point. Interesting tactic, since I’m looking to buy the film as soon as I find a good deal on a subtitled one. As a result of this, though, I may end up adding small things from the film in comparison for looking through the game itself.

The plot of the game (and the film) is pretty basic. A team of five goes to the Mayima mansion to find a lost fresco and document its discovery. When they enter the isolated building, the entrance collapses and the group is trapped inside. No sooner does this happen, the ghost of the former lady of the house lets you know that you will all die soon. Nice. From there, the story unravels with the group traipsing all over the place to find a way out. As with most horror games, though, it is way more complicated than it seems.

The game implements a few interesting ideas, especially for the time. First of all, each of the characters has their own special item that helps exploration through the house, though some are a little inan 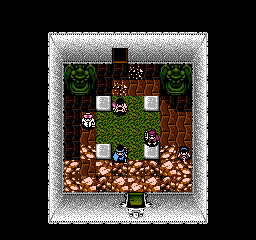 e. I understand Taro’s camera and Kazuo’s lighter. I can even understand Akiko’s first aid kit. I have to wonder where Emi gets a skeleton key, though, and Asuka bringing a vacuum is pretty ridiculous. In the film, the roles are explained, but in the game, I honestly thought Asuka was a maid, not a television hostess, as is in the film. Regardless, the special tools are used in creative enough ways through the entire game, allowing players to find clues to move forward or pass through barriers that they could not past otherwise.

Another unique idea was that when a character dies, they are dead. Gone. Not only dead, but you are treated to a gory 8-bit demise for the character. Honestly, between the religious references and the gore, I have no question as to why this didn’t end up in the US (though, I did read somewhere that it actually was intended to cross the ocean, but I don’t think it would have been nearly as good). If a character dies, not only does the ending change, but there are replacement items to make up for that character being missing so you actually can finish the game. In this aspect, I was reminded on more than one occasion of ObsCure for the PS2 and not in a bad way. Mix that with experience and level gaining, as in many RPGs of the time and the current, and you’ve got a good idea of what you’ll face in ‘Sweet Home’.

Keeping with the similar nature to ObsCure, the game allows you to switch between the characters on the fly and team them up, though parties can only allow three total members, making choices on group makeup an important part of the game’s experience. A really interesting feature is that if one party ends up 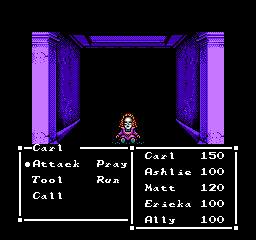 in battle, they can call for the other party or characters to join the battle if they are close enough (if they’re not, the party can call for them again), and then all five members can take part and gain experience. There were a lot of really original ideas put into this game, and it’s nice to see where some of today’s games got their ideas from. They were hiding in Japan.

Graphically, the game is interesting. I don’t know that I’ve seen such great imagery in NES games of that time. The battle portraits are great, and other portions (that I don’t want to put in here so as not to ruin some of the plot twists) were pure art for the 8-bit era. Other things, such as the character sprites, were basic to the point of incomprehensible. The first time I renamed the characters, I made two of the females male. There was also one item in particular that I didn’t even see. Not that it was important, but it simply wasn’t there. Otherwise, the game was standard fare for the time, but it pulls off the claustrophobic and isolated feel that is important to the genre.

The music didn’t vary as much as the graphics. It was all just above standard, which is still good considering how hard it is to convey the atmosphere intended with the tools of the time. It’s got some pretty great battle music, and the title theme is also of note in the soundtrack. On thinking about it more, I can’t pick out any glaring flaws. The music is not life changing, but it is appropriate.
On a separate note, th 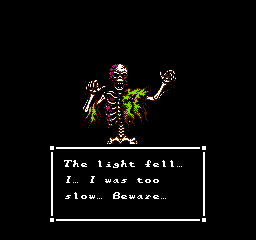 e translation is great. I’ve seen some terrible fan translations, but what little is said or written is really well done. I remember one misspelling, and it was on a weapon near the end of the game, but it is strides above most translations I have seen. Gaijin: my personal thanks for the care taken in your translation and for translating the game in the first place.

With all of this praise, you may be wondering what the flaws are, and though the game has few, they range from personal and barely significant to downright obnoxious.
My personal gripe is that the game feels more complete knowing the movie. While at the time it was released, this was ingenious, it is kind of bittersweet in the current day. If someone were to remake this game/movie now and incorporate aspects of both into it, I think it would be much better. To be honest, even without having seen the movie, I feel like the game was probably better than the movie.

There were also some small logic skips in the plot. For instance, why were there so many living people in this mansion that was supposedly abandoned for thirty years? Who were these people who were investigating before your party? If we’re looking for a fresco, why are there over twenty of them in the mansion? While the film answers the last question, there are so many unanswered questions. While I know it was the Nintendo age and clues were given by all of these things, it was still something I had itching the back of my brain.

The major flaw was that when specific items were needed, if you weren’t frugal with your limited inventory space, you had to backtrack through the confusing mansion to retrieve said item. Keeping track of where you drop the item could help, and it makes sense that you need to watch what you’re carrying, but I can think of one or two times that I went searching for the items I had dropp 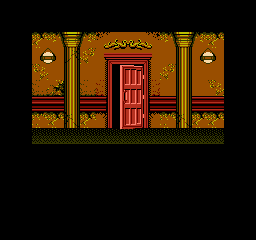 ed for at least half an hour. The fact that you can save anywhere helped every so often, but I feel that having a map would have changed this from a detriment to an obstacle.

The long and short of it is that Sweet Home is an awesome game. I started playing and couldn’t stop until I was finished, and I highly recommend it to anyone who can scrounge it up. It is a gory little piece of gaming, though, and I don’t recommend it for anyone who is the least bit squeamish. I can easily say I nearly lost party members more through the environment than through battle, and it took a while to figure out how to finish the game, but the difficulty of the game is not exactly epic. There are many memorable scenes, and I thoroughly enjoyed the game, despite any gripes I might have had. Definitely check it out, especially if you’re looking for something new and inventive from the old-school offerings of the Famicom.